It's just a game, right?  No, Guitar Hero and Rock Band are more than just games.  They capture the fantasy aspect of Rock music that we all have inside us.  From the very first dude who ever played the "air guitar," Rock music lovers have always pretended to be Keith Richards, Eric Clapton, and Jimmy Page - just as baseball fans mimicked the batting styles of Mantle, Aaron, and Big Papi.

And that's where Guitar Hero and Rock Band have filled the void.  In our newest Tech Poll, we found that nearly half of those who play video games have played either of these Rock-based games.  It's a big number, and it transcends age and gender.

But here's the kicker: Of those who have played either or both Guitar Hero or Rock Band, three in ten say they've purchased music that was featured in the games.  That's an incredible stat that says a lot about the role that "new media" plays in music sales, and about the power and influence of these participation games. 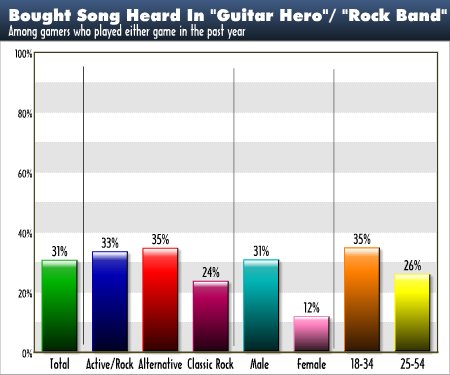 American Idol and Activision (the creators of Guitar Hero) pulled off a cool "product placement stunt" by producing a commercial that features their two finalists (the "two Davids") playing a Guitar Hero guitar in a parody spot of the Tom Cruise scene from Risky Business.  The tag line - "Unleash Your Inner Rock Star" - perfectly nails the emotion that these games bring to living rooms all over America.

These games are powerful - not just in their ability to capture the Rock 'n' Roll vibe - but also in their proven capacity to sell music.  And because they celebrate Rock music (at a time when the musical winds are often blowing the other way), we should embrace Guitar Hero and Rock Band as brand extensions that are contributing to fanning the flames of music passion.