Beyond the "7 Dirty Words" 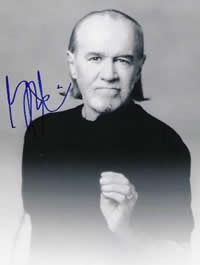 The passing of George Carlin this week brought many memories to mind, especially the controversy, the language, and indecency comparisons.  For many comedians and even DJs, Carlin was very influential in their career choices and even their development as entertainers.

But there was another side to George that came to light, from ESPN fantasy sports maven, Matthew Berry.  Just out of college, Berry was a gofer for Carlin on a Fox TV show.  Every week, people would send in loads of pictures and memorabilia for Carlin to sign, and he dutifully and cheerfully complied.  When Berry asked him why, Carlin offered this comment:

"I always do it.  No matter what.  Look, it's 30 seconds out of my life.  And now those people had a good experience.  And the next time my name comes up, for the rest of their lives, they'll say 'Yeah, I met Carlin once.  He was nice.'  I'd much rather that than a lifetime of 'Yeah, I bought all that guy's albums and then he wouldn't even sign my hat.  That guy was a jerk.'  Thirty seconds for a lifetime?  I'll do that every time."

George Carlin understood a lot about the human condition and what made people laugh - and think.  But he also had a keen sense of what entertainers bring to the lives of fans, and the relationships that are created in the process.  In our world of radio, these relationships still matter, and in fact, are very much a part of our "secret sauce."

A quick recap of "The Seven Dirty Words" (*caution: not safe for work!)