Kudos to Edison's Larry Rosin for his recent think piece about college grads and radio.  If you haven't read it yet, it's worth your time.  To give you the 10-second headline, Larry's Arbitron analysis shows that college grads give considerably less quarter-hours to radio than their less educated counterparts.

And he raises a myriad of questions about the implications, which I'll paraphrase below:

1. Is commercial radio programming driving college grads away, and toward other media, gadgets, Public Radio, etc.?

2. Should commercial radio isolate the most fertile of listening environments - at-work - among non-college grads?

3. Why is this phenomenon happening, and why don't college grads spend more time with commercial radio?

5. And what can we do about it anyway?

Larry's done the industry a service by bringing these issues to the forefront.  Like his original at-work Arbitron survey conducted in 1997, his observations are an eye-opener a decade later.  And like a lot of research, it raises as many new questions as it hoped to answer.

Here are some thoughts to add to the mix:

* What’s the trend on this?  That is, is radio's lower TSL among college grads something that's been regressing over the last decade (since consolidation), or has it always been this way?  We have this same situation in our Tech Polls where the last four years of data is wonderful, but it doesn't really address issues from the '90s - or earlier.  Has radio always had problems with college grads?

* His San Francisco example is interesting.  But are KQED and KFOG representative of most markets?  And notably, a recent Scarborough report identified San Francisco as a Top 10 market where "digital savvies" live - consumers who tend to be on the leading edge of all things techno.

* For college grads, is it simply a time issue, where they just have less of it because of their professions?  And are their jobs less conducive to listening to the radio at-work than their blue collar, less educated counterparts?  It's easier for a construction worker to have the radio on at-work than the attorney or the CPA.

To learn more, I went to our newest Tech Poll where we ask an "early adopter" question.  Sure enough, even college grads who aren't necessarily on the cutting edge of all things technology, are somewhat more likely to be ahead of the curve: 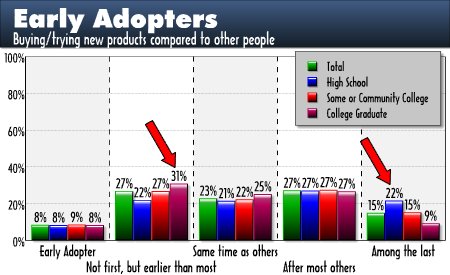 It makes sense.  When you've graduated from college, the chances are good you're making more money, and consequently, can buy more "stuff."  But does Larry's discovery go beyond that obvious truth, and does it have programming implications? As we saw in the KQED example (an exemplary Public Radio station, by the way), many listeners have gravitated to the lower end of the dial all over the country.  Does more "intelligent" programming on Public Radio stations help explain this listening disparity?

We are going to dig deeper into our Tech Poll for more answers.  In the meantime, please weigh in on this interesting topic.

Since I published thas article in Radio & Records noting the difference in listening between college grads and non-college grads, I have been rightfully asked the following question: "Has it always been this way?" So I looked at the diary data from the sample of diarykeepers from our longstanding series of studies with Arbitron.

What does this mean? That nearly all the 25-54 losses in TSL over the last decade are coming from college grads. The Non-grads are listening virtually the same amount.

For what it's worth, I also looked at today's 35-64s-- in other words the same cohort of people as the 25-54s were in 1998. And the data showed the same thing -- significant decreases only among the college grads.

Data from Public Radio shows that listening to non-commercial stations has grown significantly during the 1998-2008 era. So indeed, commercial radio is now accounting for significantly less total listening among College Grads than it did in the past.

There are, as I said in the initial article, doubtlessly many explanations for these changes. We will continue to explore them

Radio seems to be losing market share to other media that can be more accountable, meaning advances in targeting could make radio more attractive to advertisers. The knowledge that college grads are not as reachable at work as in other times is a negative that could be transformed into a positive if presented correctly – as a solution rather than as a problem.

Sellers, planner and buyers targeting upscale consumers should be configuring media buys differently than they have been, now that they know that college grads listen a lot less at work than their less educated counterparts (whatever the reasons turn out to be).

This may initially present some issues, because typically 10A-3P is the most efficient major daypart and de-emphasizing it will surely raise cost per points in the abstract. But, and this is a big but (I like big buts and I cannot lie) doing so may actually lower CPPs if the target is college grads, rather than just a broad demo.