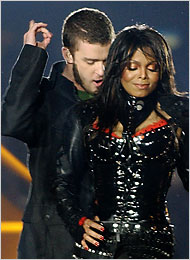 More than four years after Janet Jackson's "wardrobe malfunction" at Super Bowl XXXVIII (it was actually a great game, but only Patriots fans remember that part), a federal court has dismissed a fine against CBS.  So much for the FCC's "take" on the incident, which even surveys at the time indicated was not a big deal.

But its far-reaching impact on media "indecency" continues to be felt by broadcast television and radio operators.  For some reason, a TV event ended up having more impact on radio, punctuated by more fines, more legal scrutiny, and more understandable paranoia among talent.  That year, our Summit featured a great panel that included John King (a Washington lawyer), Harry Shearer, Rick Cummings, Lex & Terry, and MSNBC's Lawrence O'Donnell discussing the implications of indecency in radio and TV.  It was a difficult issue then, and it's still a problem today.

And what about the fallout for the radio industry?  Perhaps this incident was "the straw" that finally convinced Howard Stern to journey over to the safer waters in satellite radio.  And radio's talent, value, and overall image were sullied by an incident that was overblown by the FCC and the media in the first place.

And four years later, it's one big "never mind."