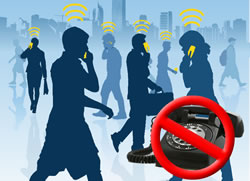 At today's Arbitron Consultant Fly-In, there is some great news about the "Cell Phone Only" conundrum.  Our Tech Poll back in '05 brought the problem to light, and it has only intensified during the past few years, as more and more consumers - especially younger ones - dump their land lines in favor of cell phones.

Now Arbitron - thanks in large part to the ingenuity of Dr. Ed Cohen - may have found "the cure" for the CPO problem.  (I guess that Michigan State education paid off.)

As we know, it's not legal to dial cell phones randomly (nor is it desirable, given that most of us don't like to be solicited on our Treos and iPhones).  So instead, Arbitron is finding CPOs by using an "address frame." Since everyone has an address, the starting point is random addresses.  By cross-referencing them to see if they have a land line, those that don't might be a CPO individual or household.

These folks are mailed a survey with a bunch of different questions about demographics and media use, along with the all-important cell phone question.  Once Arbitron determines they've found a CPO, the consumer needs to agree to receive a call from the company on their cell phone.  In this way, Arbitron has been able to run tests on these CPO respondents.

Dr. Ed reports the results of Arbitron's testing are very promising, it's the top priority for the diary service, and that inclusion of CPOs into diaries is targeted for '09.  Compliance and diary return rates look great.  And of course, this same tactic for locating CPOs might very well end up becoming the norm for PPM as well.

Arbitron is conducting similar tests for PPM and, if successful, that service will also be transitioned.

This is exciting news - for Arbitron and for radio.  There are many daunting problems the industry faces that often seem impossible to overcome.  This is one roadblock that is well on the way to disappearing.  Kudos to Arbitron for addressing it, and moving to solve it.