Going For The Gold 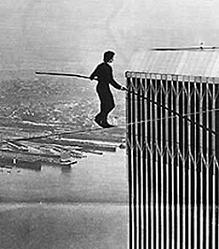 No, this post isn't about Michael Phelps (although that's not a bad idea either), but about a new movie that has recently been released.  You may have to look hard to find it at a local theater, because unlike Dark Knight or Tropic Thunder, this is one of those "small films" (yes, there are some subtitles) that may be worth your time and a few bucks.

Called Man on Wire, it's a documentary of sorts about Philippe Petit, the man who concocted a plot to run a wire between the two towers of the World Trade Center, and then does his high wire act one morning back in August of '74.  I don't usually recommend films (although the last time I did, it was for a great film called Once, which won an Oscar for Best Song in this year's ceremony), but I'm making an exception.  And with apologies to Mark Ramsey, who actually is a professional film reviewer, my batting average isn't bad.

Aside from some great drama and seeing sights that you could never hope to see, Man on Wire is an inspirational film for other reasons.  It's about the wisdom of setting an impossibly high goal, planning and preparing, and going for it.  In the current environment that we're in - both in radio and in the country - this familiar but rare mindset is refreshing and highly motivational.  As things get worse, there's a lot to be said for shooting for the top, making a commitment, and doing something special and impactful. When things seem to be at their worst, the potential to do something special and important is greatest.

So, take an afternoon off during your next "staycation" and check out Man on Wire, and get ready for a thrill ride that just might make you get a little introspective and inspired.  And let me know whether it worked for you.