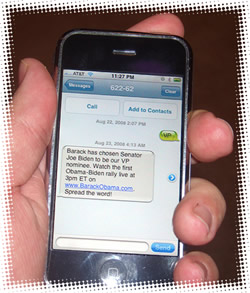 Most of us get pretty insignificant texts throughout the day - where to meet for dinner, reminders to pick up milk on the way home, or notes about running late.  But starting early Saturday morning, a huge number of texts were sent by the Obama campaign to cell phones all over the world, heralding the decision to select Joe Biden as his Vice Presidential candidate.  It was a historic text message, and it suggests new and exciting applications for texting and digital communications moving forward.

To some, this was a cool idea that may have gotten a little botched in the execution.  Some people didn't receive a text even though they had signed up.  Most others received their text in the 3am-5am range - not exactly the time when you're going to call a friend or tell others about the decision.  For some unknown reason, Obama's people held the decision until after midnight, and of course, there were leaks earlier in the evening.

But the main takeaway from this event is that, for the first time in history, this type of momentous news was communicated via text to millions of cell phones.  Obama now has shown the country and the world that he knows how to utilize technology to his best advantage, and for greater connectivity with his minions.  In many ways, his campaign is answering the question: "What's the digital application?" Not every aspect of their execution was spot-on, but the contrast that he is developing with his opponent is obvious to anyone who uses email, sends and receives texts, likes to participate in a chat, or respond to a blog.

And for radio stations out there that are still wary of starting a texting program, think about how the Obama campaign is breaking new ground, opening technology doors, and integrating fans into the process.  These are the same basic moves that stations can, and should, be making.

It's why we're devoting a significant hunk of our Summit on Thursday afternoon, September 18th, to technology applications, featuring tech guru, Leo Laporte.  And why Leo, Tim Davis, and I will be participating in an NAB panel on Friday, September 19th called "60 Digital Applications in 60 Minutes." In fact, if you look at the collective agendas for the NAB, the R&R, and the Summit, you should come away thinking that there are some strong sessions worthy of your time and money.

And yes, if it was a radio programmer running the Obama campaign, that text would have gone out at 7:20 Thursday morning.  But, hey - it's a start.