As more PPM markets come online, we are all going to learn more about how our stations actually perform.  The July PPM data that was just released contains some interesting nuggets.  One is that 7% of Arbitron’s PPM panelists do at least some streaming (the lowest that number will ever be), but only a handful of streams made the minimum reporting standards.

What does this tell us about the ways in which terrestrial radio is marketing its streams to its own listeners?  As we have been suggesting for a long time now, it is not enough to simply provide a stream.  Quality is a key, and we continue to listen to too many streams that are simply technically inadequate.  They cut out, they buffer, and they are simply too unreliable.  We would not allow our broadcast signals to be this shoddy, so why are so many streams subpar?

Secondly, we need to connect the dots for listeners.  To stream is not enough.  We need to explain why streaming at work, at home, and in other locations on a computer (or an iPhone, for example) is easy, convenient, and in-sync with other activities.  The at-work connection between streaming-PPM-radio continues to be reinforced by the data.  PPM favors stations that are rich with full-time, gainfully employed workers.  These people are likely to have computer/high-speed access.  As we continue to see in our Tech Poll and focus groups, many do not have radios in their workspaces.  Ergo, streaming is the best way to reach these valuable listeners during times when it is convenient to listen.  But most station promos for streaming fail to seal the deal. 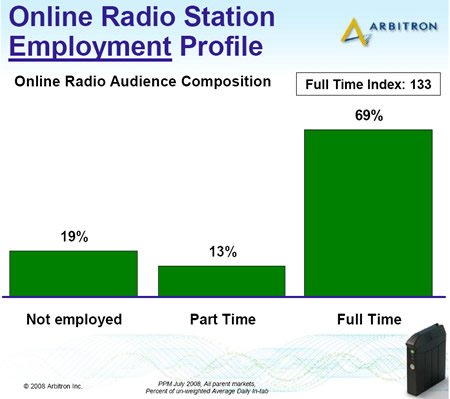 Finally, we have to make it easy.  Take a tour of station websites - in your company or outside.  How many have buried the "Listen Now" button or just made it difficult to access the stream?  I once believed that forcing users to give us an email address in order to stream should be mandatory.  I have changed my mind on that one because it is paramount that the streaming experience be a no-brainer.

We are finally getting the data we need to monetize streams, but we're going to have to work hard to build and reinforce this audience.  By the way, one of the four streams that made the PPM cut was WBEB/Philadelphia.  Owner/operator Jerry Lee just happens to be one of our "Presidents" in our upcoming "The President of Radio" session at this year's Summit in Austin.  I bet Jerry will have something to say about streaming and how it can be monetized.  Once again, a single owner shows that anyone can lead the way in radio with commitment and the right ideas.

As one who listens to a lot of streaming radio, you're right on with many of your comments.

I find some frustration in simply wanting to "click to listen". With some station websites, it can be a 2, 3, or 4 click process simply to get the player up on my screen.

And some radio sites want me to register with varying degrees of personal information in order to listen. Yipes! We'd never do that with our on-air audience - though you wonder what some stations would do if it were possible!

Why not simply offer listeners a widget-type icon they can load on their desktop for one-click access to the station stream? A widget could optionally offer other content choices.

Quality: 32 kbps doesn't cut it anymore; even on tiny notebook PC speakers the poor quality is noticed. It seems the majority of streamers I listen to are still at this rate; and some even in mono (some mono streams are not even L+R summed..just left or right audio...I heard a Beatles tune the other day with no vocals...).

64 kbps minimum; 96 kbps even better. AAC+ would be ideal and saves on bandwidth.

With PPM showing 7% listening online, its apparent its time to take this seriously. And please - pay attention to the stopset fill and how your station sounds of the net leaving and joining the terrestrial audio!

Great comments, Dan. Your point about quality and stopset fill are dead on the money. It's time to stop throwing away the stream and get serious about this distribution source.

I'd like to amplify Dan Kelley's reference to stopset fill -

While it's true the industry needs to upgrade the internet stream listening experience in terms of technical quality and we need to educate the audience on usage/benefits of stream listening, generally speaking, very few streams are ready for the attention. Some of the best sounding stations in America (when heard over the air) sound inferior to themselves nearly 25% of the time when heard from the stream!

It's the material covering the stopsets.

Listening to many streams reveals that a lot of stations have dual personalities. What you hear during music sweeps can often be an excellently programmed and well produced station, only to devolve into an altogether different and in most cases, deeply inferior audio product during the stopsets. Some stations are running a different slate of commercials during these periods and some are running promos, production music beds, PSA's, various mixtures of them all or even dead air.

Many station streams are rendered unlistenable for the up to 8 minute period that the stopsets must be covered. I wonder how much TSL could be recovered by simply making the stopset covers more compatible with the rest of the station's sound? Let's put some effort and resources into the creation and maintenance of customized stopset audio before we call too much attention to our streams. And then in the future, armed with that experience and existing infrastructure, we can create interesting and customized podcast programming that is net-only and distinct from the signal.

Very true. Streaming has been very under valued, especialy with more and more ways for people to access a stream now.

Aside from the stream, some companies are taking atvantage of the medium and re-branding their formats with a truely on-demad style of stream, where the listener chooses the artists, and styles of music they want. If this were to be co-branded with existing local brands (ie, intermingle local sweepers, imaging, jocks talking about relavant information between the listener created format). It could give the whole "stream" concept some new legs for interest with the listener.

The AFTRA rules regarding streamed content need immediate revisiting. The rates are unreasonable and onerous, so radio reacted appropriately by pre-empting them with mostly lousy sounding content.

This could all be fixed if AFTRA would bundle streaming in with the over the air fee structure. Their membership isn't benefiting from the current arrangement because none of their clients ads are being streamed.

There's opportunities with stopset fill that go beyond "McGruff the Crime Dog" or per-inquiry spots for colon cleansers or any consumer-beware spots offering to fix your credit.

If there's unsold online inventory, programmers should take advantage of that opportunity. It could be as simple as a properly-timed fill song or as wonderful as artist or even local artist profile.

A little brainstorming at the station could generate lots of ideas.

But solve the technical glitches first; and make getting in and out of that internet fill material as seamless as your on-air execution.

First off. I work in the industry, and have for almost 15 years. I have yet to actualy see or listen to an HD radio. What does that tell you about how far away from the consumer this product is. Further more, as cars start to get the net in them and more options than ever before for listening. What will the go to? The highly interactive ON DEMAND net webstream or... another teresteral option with no "on demand" options and hope for the best? My money, and the money of the people who advertise with my agency is on streaming for the future.