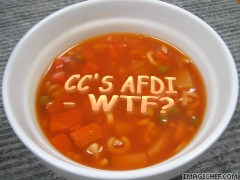 Last week, Clear Channel got together with its market managers, and promptly cribbed a slogan from Lee Abrams - AFDI (or "Actually Friggin' Doing It").  (As an interesting aside, isn't it ironic that Tribune rips off Clear Channel's brainstrust, and what's left of it rips off Tribune's marching orders to its troops?)  While AFDI may be more sensible than LIM, the bottom line is that the most top-down controlling company in radio appears to be ready to hand the reins back to local management.

GMAFB (or "Give Me An Effing Break")!

For yet another year, Clear Channel has somehow scheduled its managers meetings right before the NAB and R&R Conventions, assuring the industry that none of these people will show up in Austin this week.  They've done it before, and actually plopped their meetings right on top of the NAB Convention, of course in a different market.  And this from the largest broadcasting company in America that ought to be setting a positive tone, rather than continuing to be obstinate, contrary, and out of step with the industry.

I have a feeling that Erica Farber, John David, and other key decision-makers at the NAB and R&R would have cut Clear Channel a great deal to schedule its management meetings in Austin this week, just ahead of their conventions.  That's the way it used to be done by ABC when the NAB Radio Show got going in the late '70s and '80s.  It was the perfect way to assemble the company's management teams, while also giving them the chance to learn something at the Convention.

So as radio embarks on its most challenging time, and the industry waits to see what Clear Channel will do next, consider this acronym response to "Meet the new Clear Channel," with apologies to The Who: