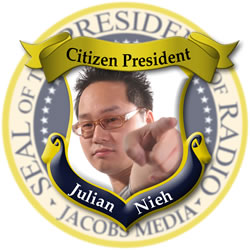 The political season is heating up, the competition was fierce, the rhetoric was sharp, and the internal debate at Jacobs Media was intense.  But at the end of the day, the winner of our "Citizen President" competition is B96 night personality, Julian Nieh.

It wasn't easy.  We got some great submissions (thanks again to everyone who gave it a shot), and it reinforced our strong belief that there are answers among the rank-and-file of radio.  The CEO panels that take place at conventions every year are valuable so that attendees can see and hear their industry leaders.  But with the "President of Radio" session at Summit 13, we're going for passion, energy, and innovation - and I think we'll get it.

Tuesday morning, we sent Julian an email at 6 a.m. Chicago time.  Now understand that this is a guy who works 7-midnight at B96.  He responded immediately, asked us to call him, and we turned the tables on the hundreds of "9th caller" phoners he's taken and gave him the good news.  What was he doing up at that hour?  Preparing that evening's show.  It confirmed our decision, and we're excited that he's joining our esteemed group of "Presidents" in Austin.

There's a lot to learn - from the independent leadership and contrarian approach of B101's Jerry Lee; to the vision that Arbitron's Pierre Bouvard brings from his experience in both broadcast research and ratings; to super consultant's Mike McVay's perspective advising hundreds of stations all over the world; to legendary industry vet and now Harpo radio pro John Gehron; to Edison's Larry Rosin and his unique perspective on research in both the media and political arenas; to superstar morning guy Kidd Kraddick's witty "take" on the radio business; to Katz Media's Gerry Boehme, truly one of the smartest people in radio; to the rock n' roll radio passion of Greg Kihn; to the unique perspective brought by one of the industry's biggest supporters, R&R's Erica Farber. 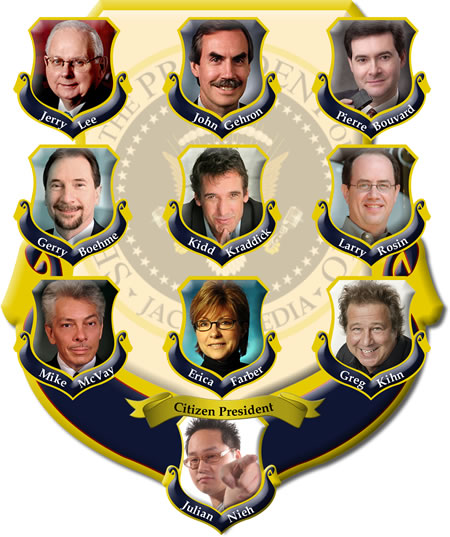 Julian Nieh will fit right in.  Thanks to Todd Cavanaugh and Erik Bradley of B96 for helping to arrange Julian's appearance (and time off!).  We're flying him to Austin and putting him up, and Erica Farber has kindly comped his R&R registration.

You can see and hear from Julian - and our other 9 "Presidents" one week from today at Summit 13.  We think this is going to be one of those content-rich, memorable sessions that will make some noise - and hopefully, provide some answers.  Hope to see you there.  Thanks again to everyone who submitted their "platforms" for change.  You can still read them at www.presidentofradio.com.