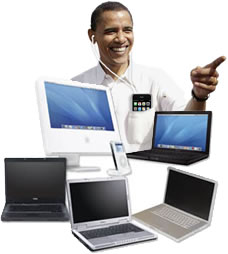 One of the more interesting sidebars of the upcoming Presidential election relates to computers and technology.  Barack Obama regularly is seen checking his Blackberry, chills with his iPod (he likes Classic Rock, by the way), and is very in-touch with his Internet fund-raising efforts.  In contrast, John McCain is essentially techno-phobic.  He's not "into" email, gadgetry, and doesn't really seem to have a grasp of the Internet.

As Wall Street Journal columnist Lee Gomes asked recently, "Can someone who never touches a computer truly be in touch with what is happening in the world?"  Anna Quinlen posed the same question in Newsweek.

I will leave that debate to you.  (Gomes argues it both ways - that time spent online might be better spent interacting with real people.  On the other hand, how can the President truly understand what is happening in the world if he isn't in-touch with what his constituents are doing every day?)

But when the conversation swings over to radio, the question should be more sharply focused.  Can radio's leadership truly help craft solutions to the digital dilemma if they aren't personally conversant with all of the different technological tools and possibilities?  How can they prioritize digital initiatives if they aren't in-touch with what their listeners (or better put, consumers) are doing with tech as it relates to entertainment and information on an everyday basis)?

To that end, shouldn't every radio CEO own an iPhone, play videogames, have a profile on MySpace and/or Facebook, text message, and own an HD Radio?

Shouldn't they know how to buy stuff on Amazon, book air travel on Travelocity, write a blog, and listen to some of their own stations' streams?  How can you truly understand how to prepare for the future if you're not part of the tech reality in the present?

But it goes beyond radio's moguls.  Every PD, GM, and GSM needs to make that same commitment to technology as well.  While we applaud Edison's "30 Under 30" campaign, the reality is that the average age of radio's managers around the country is probably well into the fortysomething range - a generation that may not necessarily know its way around an X-box console, an iPod, blogs, or Pandora.

If we're going to compete, we need to go to school.  Everything we've learned about content creation, communication, and entertainment has value.  But how it is distributed and enjoyed by end-users is radically changing, and understanding those dynamics is crucial for transitioning radio from the cozy business in the '70s, '80s, and '90s to the one that must compete with Steve Jobs, Jeff Bezos, and Sergey Brin.

Meanwhile, Obama should definitely upgrade to an iPhone.

You make an interesting point. "If the rate of change on the outside exceeds the rate of change on the inside, the end is near" so said Jack Welch. We are witness to nothing less than a revolution in tech. And it's early yet, the web being a bit over 5,000 days old. Dennis Haarsager,NPR's interim CEO, is an excellent example of a leader with a firm grasp of tech. How many other radio CEOs can you name who can walk and talk their API? And do so with the likes of Steve Gillmor and other top tech journalists? Dennis is one CEO who is deeply involved in the future. How many other radio CEOs and their managers were on the Google Chrome call yesterday? How many downloaded Chrome yesterday and have teams at work developing a Chrome strategy, an Android strategy? How many can tell you what OHA stands for? How many are on FriendFeed (arguably the hottest social app of this past summer)? How many are using Feedly? How many have used Google Ad Planner? How many have read Clay Shirky or Denise Shiffman? While I commend your counsel to go to school, what's needed here is more than continuing professional education, what's needed now more than ever is effective leadership, one dedicated to creating a future for radio.

I think you've explained (inadvertently) why Radio has bet so much on HD radio. You can't design a competitive strategy without understanding the competition.

Some of the items you mentioned could be incorporated into radio station's digital initiatives, but without knowing what they are, well...

And yet they continue to complain that "...sales just can't sell the website..."