They Don't Hate Us 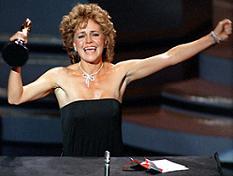 I know - today's post title sounds like the opposite of a Sally Field speech at the Oscars.  But these days, it's a little rough out there in Radioland.

We're not feeling a whole lot of love from anyone - the agencies, the press, and even one another.

This is why I drew some gratification from some focus groups I conducted recently among young college-aged types.  I went in expecting radio to be pilloried.  I walked out thinking that there is still opportunity - if we went about it the right way.

As we have discovered in other research we've conducted at Jacobs Media, young consumers continue to stare at bright shiny objects.  And that's not what radio is today.  Whether it's the ubiquitous iPods, TiVos/DVRs, their cool new "can't live without them" phones, or even hot video games, there's no shortage of distractions and attractions for their entertainment time.

And where does radio fit in?  Well, we're still there in cars, and from time to time, we score points for strong personalities, exposing local music, and community service.  But it's a far cry from the role we played in their lives just a decade or so ago.

And we have to get our heads around that changed reality - and then we need to start making adjustments.

It's difficult out there, to be sure, but now is not the time to cut back on content creators, personalities, research, and any resources that can make for a more compelling product.  While they may enjoy Pandora for a time, and the 3,000 songs on their iPods, radio still has that unique ability to be unpredictable, interesting, and a guide for what they should be listening to, and where they should go for entertainment.

Because a byproduct of rampant choice is decision stress.  This is why the most popular satellite radio music channels are always the ones that play the biggest hits.  Consumers are often confused about where to spend their money and their time.  A smart, plugged-in radio station can play an important role in helping guide them through the morass.  Who is the hot local band and where are they playing?  Is the Aerosmith edition of Guitar Hero worth the money?  A great radio station ought to be able to answer these questions, while guiding them through many others.

But not if we're voice tracking in more dayparts than we're live.  And not if the jocks are involved in too many different jobs.  And not if there's one poor web master doing the sites for all six stations in the cluster.

This is not the time to stop marketing.  Maybe one of the reasons why radio creates as much excitement as hot running water or flipping on the light switch is that we have conditioned listeners to take us for granted.  When we don't make a big deal out of our big brands, why would marketing-driven consumers take away a different message?  By not doing anything, we're saying a lot about our stations, and essentially inviting listeners to think elsewhere when it comes to fun, excitement, and entertainment.

Radio still has some monster brands, but you'd never know it by the way they are often hidden from listeners and from advertisers.  Only in radio do the highest rated stations so often get overlooked when it's time to dole out those precious marketing dollars.  In radio, you don't get medical care until you get sick.  The incessant HD Radio campaigns and their inability to stir consumers to purchase radios should suggest to us that marketing is about more than just running promos on our own air.

Isn't it interesting that a "new media" company like Apple continues to carpet bomb us with ads on "old media" outlets?  Steve Jobs uses outdoor, magazines, and television to communicate messaging and imaging about hot products like iPhones.  He realizes that marketing isn't evil.  In fact, traditional advertising is the best way to build and sustain great products.

If Mel Karmazin can get his merger, and continue to run multi-million dollar ad campaigns to support a business that has never made money, surely there has to be a way to convince the geniuses on Wall Street that terrestrial radio needs to reinvest in its product, its people, and its marketing in order to realize the essence of what this business can truly produce.  Unlike Sirius, terrestrial radio is already a great distribution outlet that reaches well more than 90% of Americans each week.  As an advertising vehicle and a way to drive web traffic, its long-term viability has been proven.  It just needs to adjust to the technical and cultural change that has taken place, and invest accordingly. 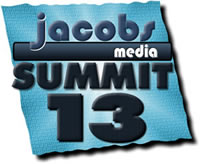 I will step off my soapbox now, but I invite all of you reading this blog to join us in Austin for Summit 13 as part of the R&R convention.  We have some great sessions lined up, but the one that addresses some of the points that you've just read is our "President of Radio" panel.  We are assembling nine of the brightest minds in radio and media to talk about how this business needs to address these daunting challenges.  Our "Presidents" may not be the typical people you see on convention panels, but that's exactly the point.  And our 10th "President" will be chosen from the entire industry because we've opened up the process to everyone and anyone in radio.  We will name that person later this week, and I think he/she will bring excitement to an already compelling session.

We need to think differently.  See you at the Summit.

"And where does radio fit in? Well, we're still there in cars"

"As long predicted in this blog and elsewhere (okay, everywhere), it is inevitable that every new car driving off a showroom lot will eventually be high-speed Internet enabled. And the consequences for the radio industry - both good and bad - are profound... Fourth, that tiny whimper you just heard was the final gasp of HD Radio. Time to move on to the real challenges, radio."

When wireless Internet is ubiquitous in-dash, terrestrial radio will be under seriuos assault.

"The incessant HD Radio campaigns and their inability to stir consumers to purchase radios should suggest to us that marketing is about more than just running promos on our own air."

Terrestrial radio is in trouble enough, without the embarrassment and distraction of HD Radio. I have read complaints about the incessant HD Radio commercials, some now laughing at the commercials - spending $680 in unused air-time, with few HD Radio sales (100,000 - 200,000). It doesn't matter how HD Radio is marketed, because no one buys radios, anymore.

HD Radio is far more than just an embarrassment, but is the malignant cancer of the broadcast industry. HD Radio interference to neighboring stations is pitting broadcasters against on another - iBiquity and the HD Alliance are destroying the industry. At least it has failed on AM, and has stalled on FM. So, the fight continues...

"...surely there has to be a way to convince the geniuses on Wall Street that terrestrial radio needs to reinvest in its product, its people, and its marketing in order to realize the essence of what this business can truly produce."

Radio should stop trying to convince Wall Street of anything. Wall Street never understood the radio business and radio never grasped Wall Street's gullibility. Each bought into the others line of patter and in the end, the wagon of bullsh*t collapsed under the baggage of results.

Since radio became focused on its stock price, it has declined by every possible measure - revenue, cash flow, earnings, multiples, ratings and of course, stock price.

In fact, radio has underperformed virtually all major equity indices, since the great consolidation panic of the late 90s.

After years of over-valuing radio, Wall Street now has it undervalued to the point where it doesn't matter anymore. What's the difference whether your stock trades at $.85 or $.75?

In the end, Flounder (radio) got sucked in by Delta House (Wall Street) and paid the price. Belushi said it best, "...you f*ck*d up, you trusted us!"

Fred's prescription is on the money, except for involving Wall Street. If the profits increase, so will the stock price and profits won't increase until radio adjusts and reinvests.

OUTSTANDING PIECE! Thanks for saying it so well.

I suggest that radio stations marry their local advertisers and provide them with many additional digital sales outlets for their local products and services.

Nix on those dopey Web sites with lame audio streaming. That's one step above HD Radio, for goodness sakes.

WiMax is here. Soon, broadcasters no longer will own a limited resource. There are 30,000+ audio streams now. With WiMax, it will increase hundreds of times, 'cause everyone can do it.

In a few months, every kid on the block will stream an audio signal that his teenage pals can pick up in their '74 Pacers, so what's a broadcaster to do? Get in bed with local advertisers.

Look, content follows cash. That's the way it's always been. Just do it again. Use your broadcast signal to promote the digital resources

We send a periodic newsletter...and rely on keywords and metatags.

If broadcasters were to do the same for their local advertisers (thus, 'marrying' them, as I wrote above) then, their profit engine would restart...