JacoBlog - Jacobs Media's Blog: Who Was Your Favorite "President"?

Who Was Your Favorite "President"? 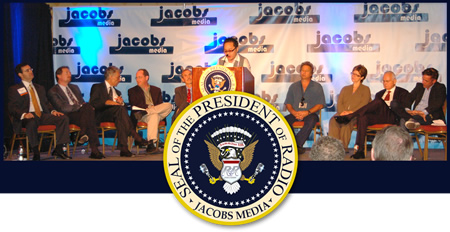 THAT was the question that many people were asking Friday morning, the day after Summit 13.  No doubt about it - our "President of Radio" generated buzz.

Of course, my point of view is a bit skewed, but I have to tell you that this year's panels actually lived up to our hyped "Best Summit Ever" pre-promotion.  (If you were there, please feel free to chime in.)

And in one of those rare moments where something actually turns out the way it was originally pictured, "The President of Radio" session went off perfectly.  We had a very diverse group of "Presidents," they were all prepared, and they totally lit up the room.  I think that's the vibe that most impacted us here at Jacobs.  In all the years I have attended panels and sessions at the NAB, R&R, and our Summit, I have never felt a more charged-up atmosphere like I did with "Presidents."  I believe our 10 participants realized they were part of something special.

Besides speaking to a standing room only crowd, the atmosphere in the room was energized and electric.  Our "Presidents" - from the urbane Pierre Bouvard, to the impassioned Gerry Boehme (who served as the session's "designated ice breaker"), to the dapper and smart Mike McVay, to the content-rich, out-of-the-box thoughts of Larry Rosin, to the legendary John Gehron, to the tiara-clad, game-changing style of Erica Farber, to the funny lines of Greg Kihn, to the gravitas-rich Jerry Lee, to the combination of sincerity, honesty, and humor of Kidd Kraddick, and to the raw energy and passion of our "Citizen President," Julian Nieh.

I came away with a few notions that I wanted to share with you.

First, we have many people in this industry - who don't hold the CEO title of a public company - with incredibly rich insights and ideas about what could make radio better.  That says a lot about the fabric of radio, the quality of its people, and the passion of great ideas.

Second, there was actually very little duplication of thoughts and ideas from this group, which speaks to the need for more diversity in helping radio find its way out of this mess.

Third, radio isn't dead by any means.  The vibrancy of "The Presidents" was reflected back by the energy of the room.  By the same token, no one at Summit 13 was kidding themselves about the seriousness of radio's dilemma.  While the attitude at CEO sessions sometimes drifted toward "everything's fine - it's business as usual," our "President of Radio" panel made a great case for better collaboration, more sharing of ideas from different corners, and of course, action - not denial.  I appreciate David Rehr's complaints about negativity (Erica addressed that, too).  None of our "Presidents" went negative, but they were all about proactivity, investment, and respect for listeners - qualities often found missing in radio today.

Fourth, there are many people "on the ground" at radio stations with more to offer than just doing a lot of jobs.  B96/Chicago night guy, Julian Nieh, represented all of YOU very well at "Presidents."  It took a lot of cajoles and class to be up there on that stage with legendary radio people, and Julian pulled it off.  His passionate plea to use the staff to brainstorm great ideas was well-accepted by the room.

Finally, if you missed it, you missed something special.  And once again, that leads me to reminding all of you who couldn't make the trip about the value of conventions.  I can also tell you that in addition to what was happening at the R&R/Summit sessions, the NAB truly put together some great content, too.  The paradigm that "conventions suck" needs to be flipped upside-down.  Companies that are serious about investing in their people should be sending their people to these conventions.

We will have Summit videos posted on our site by mid-week, so you can see for yourself.  If you were there, some feedback would be welcome, of course.  Thanks to everyone who participated in the Summit, and thanks to everyone at Jacobs Media for making it happen.