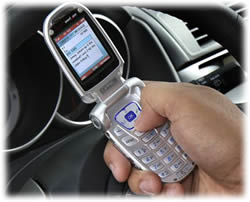 I don't know about you, but every time I hear a station take the 9th caller (especially with those touchtone sound effects), I get flashbacks to Mr. Mister and decades that I'd just as soon forget.  It just sounds dated, and is perhaps a subtle reminder that radio unknowingly continues to use antiquated techniques and tactics.

I'm not saying the phone is dead because with the cell phone proliferation, drive time phones and contests are even more viable because everyone is connected while they drive.  But the reality of 2008 is that texting is eclipsing phone use for many demographics - and not just teens.

New research from Nielsen Mobile shows that texting is up a whopping 450% in two years - an incredible stat.  I went back into Tech Poll 4 from this past February to run the same numbers for our Rock sample.  The same phenomenon is occurring (although not quite at the meteoric rate that Nielsen Mobile shows). 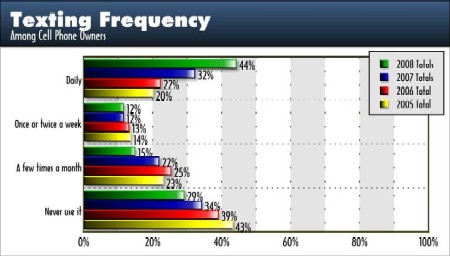 The striking thing about this new data is that texting isn't just a teen thing.  Look at how text messaging is usurping phone calls among older demographics: 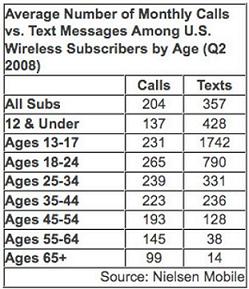 So if you're programming an Active or Alternative station, texting has to be part of your digital communication fabric.  But even if your most played artist is CCR or the Stones, texting needs to have presence on your station, too.

These are the moments where we would love to replicate "The Bedroom Project" among Boomers.  Hey, you never know.

This goes beyond texting into the world of providing a unified experience. Today, you can do things like this:

"Be the tenth caller, the tenth texter, and the tenth visitor to WXXX.com, and you'll win tickets." It's just a little contest example, but doesn't even that make the station sound bigger than just a frequency?

I remember listening to WNCI when I was young and hearing the booming "120,000 watts rollllling across Ohio," and I just was in awe of this station that just swept across the entire state. We can now do that with the web and mobile phones... make our stations seem so much bigger than they are.

But how many do?

Dated ? Perhaps - But it's the reality we deal with - How many times have we heard about a car accident happening because someone was texting while driving ? Texting is so mobile, but so dangerous behind the wheel - So, how about if we creative radio people come up with an interesting execution of asking for caller blah - We want everyone to participate, but because we don't want anyone to put themselves or anyone else in harms way by attempting to text while driving, we're asking them to save the text, and dial carefully, and be hands free if that keeps you from a ticket - The last thing any of us want is someone hurt or worse, along with a lawsuit and the bad publicity that would go with it because a listener was involved in an auto accident due to texting while driving to participate in a radio contest - Not a sermon - Just a thought!

I cringe when I hear stations say the 9th TEXTER.....because 9th is the part that doesn't fit. It's a Meatball Sunday.

They should be a random texter....9th this 10th that is all old thinking. Let's not mix old thinking with new technology!

"We've got Pearl Jam tickets and in 15 minutes we're picking a random texter to go to the show on us."

Then send everyone an autoresponder with the option to BUY whatever they were trying to win for 25% off!