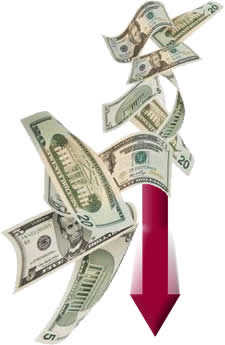 No, I'm not referring to the housing debacle, the credit crunch, or the stock market bloodbath.

I'm talking about the sorry state of radio sales.  As we know only too well, radio was having a lousy year before the economy tanked a few weeks ago.  Now that it's a global crisis, and advertising dollars have shrunk everywhere, radio finds itself in a world of hurt.

As the Summer Arbitrons are being released, it is becoming clear in our dealings with clients that from a sales department perspective, the only thing worse than a bad book is a good book.

At least when the ratings suck, there's a good excuse for poor sales performance.  But when stations are hitting or exceeding their ratings goals - and finishing in the top ranks in the very best "money demos" - and their sales are still deficient, the pressure shifts to the cubicles.

But realistically, the sales environment - especially for the biggest, most consolidated companies - has been upside-down for years.  How else can you explain the bizarre cluster decisions that most groups have made?  One year, it's separate sales staffs for each station; the next year, let's combine the rock stations' sales staffs and give that a try; one year later, it's one big sales staff attempting to sell every station in the cluster.  And oftentimes, it's back to square one with separate sales staffs again. How must advertisers perceive radio, given all of this indecision?

It's no wonder that sales departments cannot get untracked.  You'd think that after more than a dozen years of consolidation, a basic "best practices" plan (or plans) would have emerged by now.  But as we close out a disastrous 2008, and enter a scarier new year, most companies still don't have a clue about sales department configuration.

Sales training is non-existent in many companies, as reps are thrown out on the street with insufficient materials, and no road map.  Is it my imagination or should the DOS position be about developing individual station and cluster sales strategies instead of being a number cruncher, constantly forecasting and re-forecasting?  At how many clusters around the country is there a coherent and well-developed sales game plan in place that is truly strategic?  While radio has spent millions of dollars over the years, researching its programming, what has been done on the sales side to better understand sales architecture, customer needs, and the local economic environment?

Too often, sales departments are subsidizing too many uninspired people who are looking for guidance and direction.  Even at some heritage brands, many reps lack belief and commitment to sell stations that are truly legendary, with ratings success that is consistent and long-term.  There's typically a disconnect between the passion level of the listeners and the sales department.  Now, many salespeople are being asked to market digital products, and too many are hopelessly unqualified to do so.

How can we burrow our way out of this mess if sales can no longer support the costs of creating content?  How can the bleeding be stopped so that programming can once again have the necessary resources to fight it out with new media competitors?

As a consultancy, we recognized the importance of monetizing ratings nearly two decades ago when Paul Jacobs was brought in.  To date, he has made hundreds of presentations on behalf of rock-based stations from San Francisco to any number of Springfields.  He's struck by the lack of passion for radio in general, as well as the inability to fend off typical advertiser complaints about rock formats.  Instead, he has to deal with questions about why an Active Rock station doesn't have more female listeners because they are allegedly the "decision-makers."  Paul's contributions are often only short-term steroids that can never substitute for a solid foundation of training and strategic planning.

As a consultant and format designer, I can tell you that the frustration among programmers is palpable and growing.  Too many programmers (and consultants) are doing great work and delivering great ratings despite reductions in staff, talent, promotion dollars, and research.  Yet, the available dollars to maintain these ratings and support these brands are rapidly dwindling.

There needs to be some fundamental changes in the way that radio is marketed to advertisers.  And yet, you would think that the current economic environment is tailor-made for an industry sales summit to tackle the archaic ways in which radio time is sold.  We have to start approaching radio sales differently.  Simply calling on the same set of clients using the same metrics in an era of declining budgets is a recipe for the continuation of the same problems.

Businesspeople - from the local car dealer to the roofer to the restaurateur - are hurting and looking for creative, affordable solutions.  Radio reps need to put away the rate cards and the rankers.  Instead, it's time to sit down with local companies, and help craft solutions to their problems.

American radio isn't global - it's retail.  Radio needs to get back on the ground, on the streets, and back at eye-level if it's going to help American businesses climb out of the recession - and in the process, save itself.

In the coming days, we will also present some ideas so our programmers can better control their stations' destinies by making a more significant contribution to the bottom line.  Stay tuned.

The reason is that radio's sales efforts have been dumbed down. Sellers commissions are cut every year, bonuses reneged on and the combination of management cuts and non-competes have made upward mobility a pipe dream.

Creative, aggressive sales people no longer see radio as an attractive career, so many of the best have left and their replacements are not as effective, because more money, mobility and creativity are available elsewhere.

Add endless numbers of sales meetings, proposal quotas to the mix and you no longer attract the level of talent you once could. Radio changed the conditions and the market for top sellers responded.

When I took my first radio sales position in 1989, I was fortunate to be at a station that provided radio sales training by Jason Jennings and Chris Lytle. They provided excellent customer-oriented radio sales techniques that I adopted immediately and with enthusiasm. Within 6 months, I was beginning to have success. Prospects appreciated my approach: "you're the first radio sales guy to come in here without those charts saying 'our station is Number One.'" The techniques I was trained in focused on moving advertisers' inventory, or filling tables at a restaurant.

It was great, until a few months later a new GM came in and immediately threw out this client-focused approach to selling radio. "You're too involved with them! You're not making enough calls...bla, bla, bla."

So, I was a pariah for embracing the very same sales techniques this station had trained me to apply.

Over the years I've observed that radio sales managers will give ample lip service to "serving our clients," but in practice rarely provide the training or the environment in which radio reps can actually do this. They always seemed to prefer the one-dimensional spot hawkers.