Generating Your Own Buzz 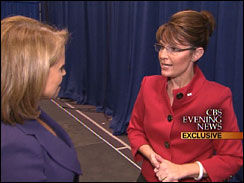 I don't know about you, but I stopped caring about Katie Couric a couple of days after her anchor debut on the CBS Evening News.  Part of my disinterest is due to the fact that most of my news consumption occurs on cable channels like MSNBC and CNN, or simply online at various news and blogger sites.  But the other part of it has to do with the demise of the mega-news anchor model.  Gone are the days when Tom Brokaw, Dan Rather, and Peter Jennings influenced the news.  Today, we're all on our own, finding, disseminating, and consuming news events in any manner we like.

So when Couric re-emerged with her ground-breaking interview with Sarah Palin, it caught my eye - along with many others.  While she's still in third place, her ratings are up, and traffic to the network's news site is reported to be "substantially higher than normal."

It is noteworthy that all the advertising and hype in the world that CBS bought, packaged, and arranged couldn't replicate the buzz that Couric's Palin interviews generated.  By creating her own news story, Couric has vaulted herself back into the national news conversation.  People are talking about her, and with some great content, her level of respect has increased in a big way.  Whether Sarah Palin tanks tonight at the debate or whether she represents herself well, the Couric interviews are now a part of broadcasting history.  You know they will be shown again and again, on TV, the web, and in classrooms.

Radio stations have the ability to move the needle, too.  WCSX's J.J. & Lynne have "made the news" a few times in recent months.  A case in point was an interview with Jason Bonham that turned into a Led Zeppelin reunion story.  Thanks to super-producer Jim O'Brien, their content was packaged, sent to the media, and ended up being reported in umpteen newspapers and music websites.  While Robert Plant recently squelched these rumors, the fact that he even made a statement says a lot about how this story took off.  And it all started at a Classic Rock radio station in Detroit.

One of the upsides of all these news outlets - broadcast, cable, and Internet - is that there's a lot of time and space to fill.  Radio stations and their personalities have the ability to make their own news, and in the process, generate buzz and legitimize the importance of local radio to consumers.  Just ask Katie Couric.