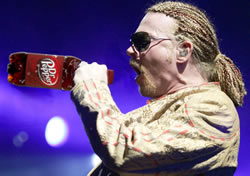 When it was announced last March that the marketing folks behind Dr. Pepper would give away one free sample of the soft drink if Chinese Democracy was released before the close of the year, it seemed like one of those impossible marketing promises.

But more and more, it appears that the always-delayed album will finally be in Best Buy stores next month, and Dr. Pepper will make good on its promise.  Now if every American took them up on the offer, Ad Age estimates a total cost of $165 million.  But, of course, consumers will only have 24 hours after the release of the album to go online and register for their free sample.

Crazy?  Like a fox.  There will clearly be lots of new Dr. Pepper sampling, loyal drinkers of Dr. Pepper will be happy, and of course, the campaign is already garnering lots of free publicity in media outlets all over the world.  Wes Brown of Iceology points out that Dr. Pepper will likely take credit because after 17 years of waiting for the new album, the soft drink company got it done in six months.  Yes, it will cost money, but the payback is already enormous.

It's a great example of thinking big with marketing, hitching a wagon to a media star, taking a risk, and making an outrageous statement.  No, it's not "40 minutes of non-stop rock" nor is it "Rocktober."  And isn't that the point of bold, over the top guarantees?

Full disclosure:  I am indeed addicted to Diet Dr. Pepper.