Perhaps your eyes have been peeled on the state of your 401K these days, so you might have missed the major announcement from Ringo Starr.  The formerBeatles drummer has announced on his website that as of this Monday (October 20th), he will no longer be accepting fan letters requesting autographs.  Citing that he's too busy to bother with this stuff anymore, Ringo made it official on a video posted on his site, "Sorry, No More Signing Stuff."

On the one hand, you can understand how a music and pop culture icon since the mid-'60s could be fatigued by the constant onslaught of requests for his time and his signature.  On the other, here's a guy who is still releasing albums, touring, and selling hoodies, baby doll tees, and tote bags on his website. 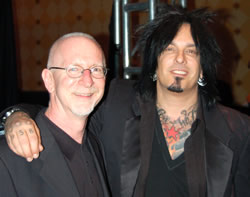 Contrast that with Nikki Sixx, who spoke at Jacobs Summit 13 last month.  Not only did Nikki take questions from the audience, but he hung around our meeting room for more than an hour, signing anything and everything that was put in front of him by adoring fans and Summit attendees.  As Nikki noted in his interview with Keith Cunningham, understanding and listening to your audience plays a major role in how he makes decisions about Motley Crue, Sixx:A.M., and his personal career.

There's some sort of DNA pattern that tends to distinguish many famous Rockers from their counterparts in Country.  Oftentimes, the former simply feel that it's unnecessary or an imposition to cater to fans, while most Country artists totally understand the fine art of serving the audience.

While Ringo may have his reasons for drawing the line in the sand with his audience, his pronouncement reminded me of a quote I read shortly after George Carlin passed away earlier this year.  He explained why he continued to fulfill fan requests, week in and week out:

"I always do it.  No matter what.  Look, it's 30 seconds out of my life.  And now those people had a good experience.  And the next time my name comes up, for the rest of their lives, they'll say 'Yeah, I met Carlin once.  He was nice.'  I'd much rather that than a lifetime of 'Yeah, I bought all that guy's albums and then he wouldn't even sign my hat.  That guy was a jerk.'  Thirty seconds for a lifetime?  I'll do that every time."

What will they say about Ringo?