It's The Economy, Stupid 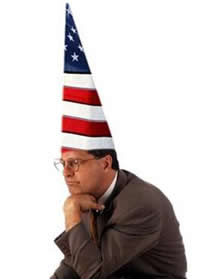 Last week, I conducted some Listener Advisory Board groups, and of course, I couldn't resist talking a little about the economy.  What started out as a planned five minute discussion turned into something much longer, richer, and insightful.

Listeners - or shall I say, consumers - are very nervous about the vagaries of the economy, and they're already changing their lifestyles to accommodate the reality of the last several weeks.  They say they're driving less, and they'll look for more fuel-efficient vehicles the next time around.  They say they're eating out less, going to fewer concerts and entertainment events, and spending more time with their families.

If this sounds familiar, chances are good that these are changes that many of us are also making in our own households.  No matter what our political leaders in terms of their visions of our economic future, people are taking control of their lives and making changes on levels they can affect.

In addition, they emphatically told us they're looking for deals, and clipping coupons like never before.  They explained that they would welcome coupons from station advertisers, either emailed to them or accessible by visiting a station's website.  Our company has sent out numerous memos about the value of couponing, and yet many sales reps are still running around with rate cards, quoting CPMs.  If your station is desperately looking for new sales avenues, and ways to re-energize local advertisers, and you haven't designed a couponing program, you are missing a major opportunity to take advantage of these economically changing times - and to provide a service to your listeners and your advertisers.

Finally, there's the topic of Christmas music.  In his blog last week, Mark Ramsey posited that Christmas music on the radio will be bigger than ever this year, as listeners retreat to "comfort music" during tough times.  That made sense to me, but after listening to a couple of LAB groups, now I'm not so sure.

Several respondents told me that Christmas music will be a reminder of how much less they will be able to spend on their friends and family this year.  When stations start launching 100% before Halloween, it's not interpreted as a good thing.  In fact, listeners often perceive this as greedy, out-of-sync, and off-key with what's happening in their daily lives.  Most aren't expecting this to be a great holiday season, and many are approaching the end of the year with trepidation.

Maybe the silver cloud will be that the absence of material things will usher in a period where families get back to their roots, thus discovering the true meaning of the season.  And maybe wall-to-wall holiday music will match that mood.

With all the turmoil and uncertainty they see every day on cable and network TV, they are simply looking to radio as a source of good news, of escape, and of relief.  They value charity and community, over who's playing "White Christmas" most often.

How will your station adjust its vibe to fit changing audience needs and priorities as we wind up 2008?

Maybe George Bailey had it right all along.

Having Obama with us, there is no need to worry about Economic..anyways your points were appreciated !