JacoBlog - Jacobs Media's Blog: The Shift Is On

The Shift Is On 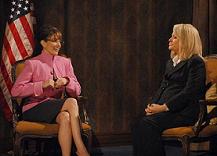 By now, it seems like just about everyone has seen one of Tina Fey's take-offs on Sarah Palin.  But more people have now checked them out at their convenience on the Internet than by watching SNL in real time.  Between DVRs or watching them on streaming video sites, two-thirds of the "views" of these bits have occurred outside of the traditional slot that SNL occupies.

That says a lot about how consumers are enjoying their entertainment.  Rather than being tethered to the couch late on a Saturday night, Americans have learned that there are easier ways to watch Tina send up Sarah.  While NBC hasn't figured out exactly how to monetize all this off-air viewing, they are moving closer toward attaching advertising before and after these clips.  But they appreciate the idea that viewers are virally passing them via email to friends, families, and co-workers.

Thus, success is being defined differently.  It's not just about ratings - but about aggregating all of this viewing to better deliver eyeballs to consumers.

And in many ways, this has a connection to radio, where podcasting provides us with the ability to time shift, listen when it's convenient, and to monetize an entirely new stream of revenue apart from :30s and :60s.

NBC is going after this opportunity with a vengeance.  They clearly understand the importance of time shifting, viral marketing, the ability to generate revenue, and provide value to their advertisers.  While they have the issue of viewers zipping through TiVo'ed commercials, they also recognize the power of people doing their marketing and buzz generation for them.

Is radio thinking along these same lines?  For stations, personalities, and networks that have the content, how can we move more strategically to make it more accessible, while cashing in on the buzz that our shows and stations create?

These are questions that we've been talking about for a few years now, and experts like Jason Calacanis and others even provided some road maps for radio.  It's time to stop talking and start doing.