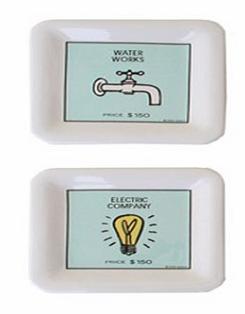 Remember playing Monopoly with your friends and family?  The two holdings that were of the least value on the board were always the utilities - Water Works and Electric Company.  This was because you couldn't build on them, no one ever seemed to land on them, and frankly, they were boring.

That's what utilities tend to be.  Yes, they're there when you need them, but they're easy to overlook, so you take them for granted.  That's why these past few tumultuous weeks in the world, I've noticed that same emotion (or lack thereof) coming from my iPod, whenever I go to Pandora, or even satellite radio.  They always sound the same - whether the stock market is dropping 500 points, when the Presidential race is heating up, as the Red Wings are about to begin their quest for the next Stanley Cup, or when we have a beautiful weekend in October as the colors change here in Michigan.

That doesn't make these "new media" entertainment services bad, but it does subtly communicate to the consumer that like Water Works or Electric Company, these media are typically inert, and not reflective of what's going on around them.

Too often, broadcast radio is emulating this same quality - and it's a mistake.  It's not uncommon to listen to music radio and get that "everyday's the same day" feeling.  Once you get beyond the morning show, music shows have that mechanical, rote sound aren't doing themselves any favors.

To some degree, misinterpreting the "secret sauce" of PPM is part of the issue.  There's a new conventional wisdom forming that the way you win with meters is to bland out your station, install more segues in the clock, shut up the jocks, and just play highly-testing (OK, these days, what everyone else is playing according to Mediabase) songs.  In fact, the thinking is that we no longer have to identify our stations like we did with diaries.  Our brand names - which are marketing gold - can be left out of more and more breaks.

But there are other ways to win in PPM, too.  And in the process, your station can succeed within this new ratings methodology, while you fight the larger battle against new media, and additional sources of competition for your listeners' time.

First, of course, there's personality - something that is devoid in services like the iPod or Pandora, and only nationalized in satellite radio.  A local team or talk host who is reflecting what listeners care about at home is a great formula for PPM success.  This is why personalities like John DeBella and Preston & Steve in Philly continue to score well for WMGK and WMMR, respectively, no matter the ratings methodology.

But the other secret sauce of PPM - and competing against new media - is making stations interesting, programming an unexpected feature, reflecting a big event (the Vice Presidential debate, the Olympics, the release of an AC/DC album, Halloween), and simply not sounding the exact same, day in and day out.  These features and specials print in PPM.  You put together a great day, a well-promoted feature, a contest that captivates the audience, and a few weeks later, you're more than likely to see a positive result in that PPM weekly.

Consumers get bored by their iPods, even if they have thousands of songs to choose from.  Having an infinite number of streams to choose from on your phone is all well and good, but the "decision stress" of not knowing where to go sets in.  (I don't want to listen to 500 stations on AOL radio - just tell me which are the good ones.

We're living in an ADD world, where listeners continue to ask "What's new?"  They don't want to hear the same songs and the same jocks saying the same things everyday.  They want to hear differences, they crave something new, and they desire content that can shake them up a bit.

When you TiVo "Grey's Anatomy," you don't want to see the same plot each week.  When you check out one of the baseball playoff games, you're hoping to see a new and exciting way to win a ball game.  When you plunk down $9 on a movie, you don't want to see the same rehashed film you saw last month.  But in radio, we continue to crave "utility programming," ensuring that we sound the same, everyday.  Back in the day, our consistency and reliability was a strength.  Today - given all the media and technology choice - it could be a big part of what's hurting us.

Against some of the new media "sameness," radio can, and should be actively competing, and not just when hurricanes and natural disasters strike.  It's not what stations do when there's a crisis that counts - it's about what we're programming the other 360 days of the year that matters.

A viable programming department, that pushes itself to actually program, day-in-and-day-out, is what keeps listeners coming back for more, and in the process, keeps new media and their gadgets in P2 positions.  Radio cannot compete against Zunes, streaming radio, Music Choice, and other interruption-free music sources head-to-head.  Mike McVay, one of our Presidents of Radio last month at Summit 13, said it best as he emotionally outlined one of his campaign planks:

"I will stop competing with the iPod.  How many programmers say 'We need to compete with the iPod'?   What are you smoking!?  The minute commercials come up, you lose!  We will make it mandatory to have compelling, entertaining radio."

In their haste to slash their way to financial respectability, too many radio CEOs are cutting the hearts out of their companies.  By laying off programmers, placing one PD over multiple stations, and removing staff resources, we're going to end up sounding like bad iPods, unfortunately with stopsets, live spots, and remotes.

A few years back, Les Moonves referred to this strategy as "burning the furniture."  It won't work.

At the same time, however, companies need to start demanding that their programmers step up, and live up to their titles. On a weekly basis, Jacobs Media sends out programming ideas that are designed to help make stations get away from the "utility sound."  Too often, only a handful of PDs get the message, and find a way to make them happen.  Cranking out great Selector logs isn't programming.  Creating compelling content on an every day basis, reflecting their local markets and the world around them, and giving their audiences something new and different is what programming is all about.

So, ask yourself whether your station is being programmed like the Electric Company or whether you're thinking more like The Daily Show.  Are you creating content - on the air and online - that can move the needle in PPM and in your audience's hearts and minds?

At the same President of Radio session, master programmer John Gehron, now working for one of the greatest entertainers of all time - Oprah - summed it up nicely:

"Program Directors are spread so thin there is no time to develop new ideas.  Active formats need active programming.  In the PPM world we’re finding out that little things make a difference, but today’s PDs don’t have the time to worry about little things."

So how do we change this?  We have to change our behavior.  We have to create a vision for content.  We must have a massive re-investment in product and people, people who would create new content that will energize our listeners and builds excitement and passion for radio again.  We have to re-build our content infrastructure just like this country has to rebuild its roads and bridges; we have to rebuild our programming and content."

If you're a GM or market manager, you should be asking more from your programmers, while letting the moguls in the home office know that your station simply cannot produce great content without the proper tools.  If you're a programmer, are you focused on making your stations sound compelling, using your time well, and utilizing the staff that you have left?  And, if you're an owner, CEO, or RVP reading this, do you really think that "less is more" when it comes to programming experts and resources is a winning formula for building great companies and great brands?

FYI; As you know, I was a morning guy for over 20 years, and for the past five years I've been and "independent". One of the things I've been working on is a collection of "Tips for Living" called "The Real Life Survival Guide".

Well, I've just started creating minute long podcasts from the 200+ interviews I've conducted (my goal is to produce 2 new episodes per week), and I'm offering them, FOR FREE, to anyone willing to try "programming a new feature..."

You can check out my efforts here;

Fred's right but this begs the real issue that is plaguing radio - too much debt.

The current financial woes of most radio companies make it nearly impossible for them to provide enough personnel to implement what he suggests. The cost of debt service has forced operators to cheapen the product, which is the main reason that listeners and advertisers are slowly weaning themselves from it.

A big sellout inspired fallout is probably what's needed to right the ship. Most radio stocks were all but worthless even before the market plunged and reorganized radio companies (at 5-7 times multiples probably) with new leadership can revitalize the industry. More of the same will hasten the erosion and further poison radio's well.

Re capitalizing at drastically lower multiples is the only responsible thing operators can do. Their shareholders would be better served with a smaller interest in a company that had a chance to grow - 10% of something is better than 100% of nothing.