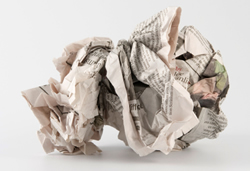 First, analysts of the radio business started getting fired.  Many of you remember Deutsche Bank's James Dix, who was a fixture at radio meetings and conventions.  Yesterday, Citi let radio analyst Tony Wible go.

Now, it's the demise of radio columnists in daily newspapers.  Before this year is over, the famous Robert Feder (Chicago Sun-Times), John Smyntek (Detroit Free Press), and now Clea Simon (Boston Globe) will shut down their word processors, and radio reporting in their respective papers will come to an end.

While this says a lot about the health of print media, it also makes a statement about the state of radio.  If the industry was making news, generating buzz, and dynamically impacting local markets, there would still be ample coverage.  But when publishers and editors sit down to evaluate what parts of the paper consumers are reading, radio is falling by the wayside.

The loss of Howard Stern to a medium where he has become essentially invisible, radio's lack of marketing and promotion, and the overall talent drain that has seen great programmers leave for different pastures all conspire to keep radio off the media's radar screen.  If you think about, most of the headlines from this year have revolved around PPM squabbling, rather than innovative programming, new formats, and initiatives that radio has initiated.

The fact that most radio stations have essentially stopped marketing makes this situation even more difficult.  At least in many cities, newspaper columnists wrote about jocks, stations, formats, and rumors - all topics that keep the average consumer talking and thinking about us.  Those days are clearly waning.

We cannot simply wait for the next natural disaster to illustrate the power of radio.  Until we start making news of our own - with dynamic formats, breakthrough personalities, and technical innovations - radio is destined to fall even further off the map.