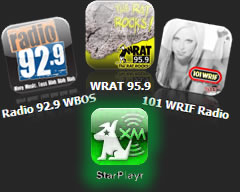 Schadenfreude.  We all feel it from time to time, some of us more than others.  It's that emotion that causes us to feel good when someone else suffers.  Many people are feeling it about Wall Street brokers and the Detroit 3 CEOs right now.  Whether it's rational or even nice, it's hard not to sometimes get a nice glow from someone else's pain - even if you aren't doing especially well yourself.

That's probably how a lot of broadcasters are feeling when they look at Sirius XM stock.  When I wrote this blog, their stock was sitting at about 15-cents a share.  So while most other radio broadcasting stocks aren't doing much better, you know there's a little schadenfreude going on, especially given Mel's famous quotes about how a company's share price ought to determine how it should be judged.

But here's a little piece of schadenfreude that isn't so snarky because it is well deserved.  It turns out that Sirius XM is furiously working on an iPhone app (called StarPlayr).   It sounds pretty cool, and the developers are frantically trying to make sure that it technically works and that it receives approval from the Apple Supreme Court.

Yet, it's not out, and "old media" broadcasters have been able to produce a solid iPhone streaming product for months now.  Between aggregated sites like AOL Radio to FlyCast, groups of stations are available on iPhones.  Isn't it interesting that satellite radio - always positioned as the future, the next big thing, and so much better than good old AM and FM - has fallen behind when it comes to technology?  As their business model has been leapfrogged by new media and cool gadgets, satellite radio has been tethered to the way they've always done things.

And terrestrial radio has now moved even a step better.  Pardon a little shameless self-promotion, but Jacobs Media's "stationalized" app allows individual stations to have their brands right on the desktops of iPhones all over the planet.  Since we released our app last week - ahead of Sirius XM's - we have received dozen of inquiries, even in this lousy economy.  Broadcasters big and small from the U.S., overseas, as well as Internet stations, quickly understood the beauty of this killer app.  New stations will be coming online every week, as soon as we can get the simple process going.  We are also getting stats that the downloads for the first "stationalized" app - WRIF's - are through the roof, reinforcing our belief that radio's best brands will excel on cell phones, in this case, iPhones.  This begins radio's dream of being easily and attractively accessible on mobile devices.  By the way, apps for WBOS (Radio 92.9 - Boston) and WRAT are also "up."

As for Sirius XM, dream on.

Great Job Fred - I downloaded the RIF app right away and showed it around here. It even works reasonably well on the slower EDGE network.

1 suggestion for future versions. Enable the app to run in the background so I can still check e-mail and use other apps on my phone while the radio is on.

Rusty at SomaFM has figured out how to do this with his web radio channels. www.soma.fm

Keep up the great work!

Maybe Mel should just license your app. I'm serious (no pun intended) - at this point, isn't he spending much needed cash trying to reinvent the pencil?

Your "stationalized" app is amazing, and a GREAT EXAMPLE of how stations can adapt to changing technology and stay relevant in the changing marketplace. bravo!