OK, I'm getting a little political with this post, but it's a great illustration about the power of using personality and warmth to connect through newer digitally communiqués, such as emails and text messages.  Marshall McLuhan taught us all about the importance of "hot" and "cool" media and messaging, and the Obama campaign has figured out how to make it work, unlike any other political machine we've witnessed.

If, by chance, you signed up for text messaging or submitted your email address at www.barackobama.com, you've been receiving missives from a variety of people from the campaign, including Obama himself.  What is striking about these messages is that they are encouraging without being cloying, and they keep supporters up-to-date with the campaign's thinking.

They are also very personal, using first names - the supporter's and Obama's himself.  It is interesting to receive an email or text from the candidate (and now the President-elect) that is simply signed "Barack."  It connotes familiarity, association, and a personal connection - even when you realize that you are one of perhaps millions of people receiving the same message.

This is also why radio station email messaging can be so much more effective when it contains that personal touch, conciseness, and simple messaging.  Every email from the Obama campaign is personalized, brief, and contains a simple action step.  They do not offer too much information or promotions, and there are never typos.  Your morning guy may not have the power and presence of a political candidate, but to your listeners, he may be the conduit between your audience and your station.  Unlike generic emails that we continue to receive from stations, your DJs can make the connection that iPods and other technologies cannot.

In future blogs, we'll talk about how some of the lessons of the Obama campaign can work for radio - if we're smart enough to rethink some of the procedures we've been employing for years.  And if you were a McCain supporter, unhappy with the recent turn of events, I would ask you to go beyond your political leanings, and think about the Obama campaign as a way to get schooled about how to do it right.  The Republican Party is doing the exact same thing as we speak. 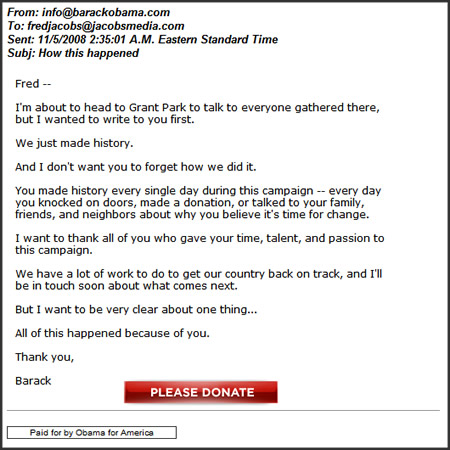