Arrested for Buying Advertising While Blind

Lately, there's been a lot of focus on Detroit, and how Ford, GM, and Chrysler will pull out of this mess.  There are a lot of factors in play, from the quality of their cars to union wages.  But for those of us who live in and around the Motor City, there's also a sense that the marketing efforts from the Detroit 3 have been uniformly abysmal.

A case in point is the incessant  promotion of satellite radio.  Our Tech Polls - and now just about every media and technology pundit in America - continue to tell us that Sirius XM isn't the "X factor" that will sell new cars and trucks.  Yet, you continue to see satellite radio touted in commercial after commercial. 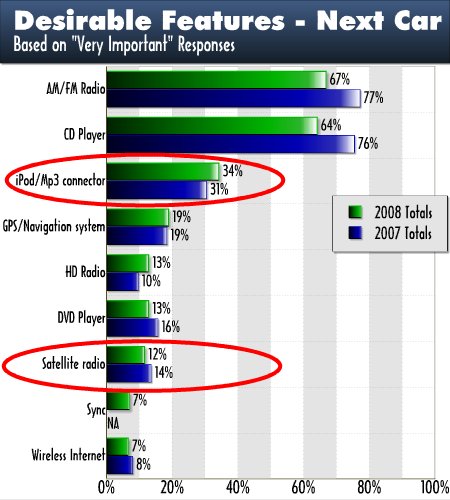 We know these ads could be much more effective if they promoted the ability to plug one's iPod into the vehicle’s sound system.  For so many consumers, that's a key selling point.

So why should we be surprised by the results of a study from Prosper Technologies that suggests that a new media allocation model is long overdue in the automotive industry?  Surveying more than 17,000 consumers, they conclude that there's a "disproportionate allocation of spending on TV versus other media."

Yes, the advertising mavens tend to spend about 40% of their automotive budgets on TV, and yet, which medium does the Prosper model suggest is more effective?

As James Geoghegan, President of Media Head, points out, "These findings are nothing short of a complete re-think of media planning."  Well, I guess so.  And yet, radio takes a distant back seat to television in automotive media advertising.  And it's looking more and more like the Internet could be the big winner in 2009.  So what's the problem?

Some of radio's CEOs have submitted that it's all about perception.  While many would take exception to that claim, in this case, they may be right.  As the Prosper model shows, "the amount of radio consumed, its influence to purchase, combined with lower costs makes it a stronger media option, which according to consumers is under-utilized."

Sadly, radio is making a lot of negative headlines these days.  Ongoing layoffs, the firing of popular personalities, and other events continue to put the medium in a bad light.  And yet, the intrinsic value of radio - which was always overlooked even in good times - remains as an incredibly effective way to sell just about anything.

Blogs are good for every one where we get lots of information for any topics nice job keep it up !!!