« Radio To The Rescue | Main | The Next Great Frontier » 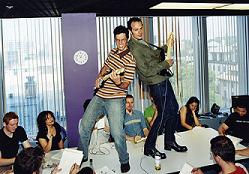 As video gaming becomes an even more significant part of the overall entertainment economy, think about the deal that Rock Band creators cut with Viacom back in '06.  The company paid Harmonix $175 million, but an earnout agreement earned them a $150 million bonus.

It was based on the success of the game.  And by the looks of that bonus, Rock Band has been a huge success for Viacom.

But wait, there's more - Harmonix founders Alex Rigopulos and Eran Egozy have another bonus coming in '09, which is expected to exceed this year's windfall.

The math is simple - a $190 game that sold 7 million copies last year, plus 26 million downloads from the game (at about $5.49 for a typical 3-song bundle).  That's some serious revenue.