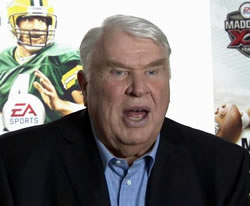 A recent Nielsen "Consumer Insight" report does a great job of exploring the growth of Electronic Arts' Madden NFL game, from its debut in 1988 up to today.  When the game was first released, former coach John Madden was a lot bigger than Electronic Arts, and he was hired to give some credibility to a new video game created around the NFL.  Today, it's a total flip-flop, as the game has dwarfed the color analyst, and has a life all its own.  To give you some perspective, two weeks after Madden '09 was released, EA reported sales of $133.5 million, topping the previous year's release by 6% at the same time.

The way that EA has grown and nurtured Madden NFL is a fascinating lesson about marketing, and growing a brand.  There are some great applications to radio, even in these difficult times.  Here are some of the ways that EA has taken steps to ensure that Madden NFL is the industry's top video game, followed by ways that radio can respond in kind:

The online reality - EA moved Madden from the video screen to the computer screen by taking the game online.  Last month, Microsoft announced that more than 14 million users subscribe to XBox Live, a way to connect their systems to the Internet, allowing gamers to play against friends and fans from around the country.

This creates the type of social networking experience that radio is still trying to get its arms around.  It is not just a good idea anymore for stations to have an online presence and to create digital brand extensions - it is essential to growing radio's brands.

Fantasy - Realizing the power of fantasy football, EA created a new "Fantasy Football Phenomenon," allowing gamers to participate in a fantasy draft, and import their fantasy teams in Madden '09.

As we've seen in our Tech Polls, fantasy leagues are a part of the online experience for about a quarter of our sample.  This is why bracket contests, online voting, and providing station fantasy football leagues are smart ideas for radio.

Mobile applications - Gamers can now play Madden on their phones, a version that has now cracked the top ten mobile downloads list.  At more than $4 per download, this is another profit center for EA, and gives the game presence in the most important digital location.

For radio, mobile devices are what it's all about.  This is another reason why we're offering radio stations the chance to create their own "stationalized" icon for iPhones, while encouraging stations to incorporate texting applications in their programming and marketing strategies.

Steady improvements - Every year, EA brings more realism to the action with better graphics, cooler replays, and even situations that reflect the changing reality of the NFL (salary holdouts, injuries, etc.).

In radio, we are often too comfortable creating evergreen events that are essentially the same year after year.  The Madden story should encourage radio to make each year's listener experience better than last year's model.  It takes work to make a better, improved concert festival, for example, but that's what will keep attendance strong, and discourage listeners from taking stations and their events for granted.

Personalization - To make the game more individualized, users can take a Madden IQ test that assesses their talent level, and then the game makes the proper adjustment.  Additionally, the user can become more involved by playing the part of the owner (setting ticket prices, for example), the GM (player drafts, etc.), and of course, the coach (play calls, depth charts, etc.).

Radio stations can bring the listener into the experience with playlist features, and even contests like "Owner For A Day," thus giving the audience a chance to actually participate with the station.  Online voting for features, special weekends, and other programming features is another way to empower the listener to make him/her feel more a part of the station.

Partnerships - Realizing they had a good thing going with Madden, EA forged alliances with the NFL and ESPN.  Thus, a hugely popular game combined forces with the biggest sports league and the pre-eminent media sports authority.  This also works for the NFL as regular gamers become savvier viewers.  And for ESPN, EA has worked with the network to create a reality TV show, Madden Nation, as well as using Madden '09 graphics to diagram plays, and produce game simulations as a part of their reporting, sportscasts, and analysis.

Radio often benefits when it gets out of its comfort zone, and creates strategic partnerships to better promote and market its programming.  A great case in point was many of the original "Rock Girls" campaigns that were co-presented with Comcast.  Radio can now use its monster PPM cumes to attract strategic alliances with other media outlets (newspapers, television) that are also looking to expand their reach during tough economic times.

Sponsorship opportunities - EA doesn't hesitate to integrate sponsors into the games (including NFL sponsors), making it easier to reach young males.  Sprint, Snickers, and Under Armour are very visible in Madden, and are also league sponsors.  There's a synergy in Madden partnerships that allows EA and the NFL to both benefit from advertiser exposure.

Radio needs to better integrate advertisers and sponsors into its best events, and do so in more creative, non-traditional ways.  The days of simply turning over events for the sales reps to sell are long gone.  Today, events that can be created around sponsors - while still supporting the strategic values of the station - are where it's headed. 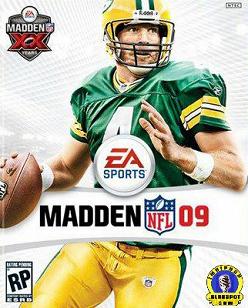 Flexibility - EA has made the cover of Madden a media event.  This year's game came with some controversy, as Madden '09 featured a retired player, Brett Favre.  When Favre "unretired" and became a Jet, EA could have had a disaster on its hands, as he was pictured in a Packers uniform.  Instead, EA released a downloadable roster patch that placed Favre on the Jets roster, and thus generated even more buzz and interest in Madden '09.

Radio stations need to do a better job of integrating "what's going on" in the world, the U.S., and in local markets more a part of its programming, features, and marketing.  Whether it's building promotions around the Presidential election or the Super Bowl, Radio could sound less static and predictable, while adding a more current feel to its programming and promotions.

Mass appeal - Madden is a "big tent" experience, with appeal from first-time gamers to adults with families.  In fact, EA reports that seven of every console owners are married.  The game also crosses racial lines, and is especially appealing to African-Americans.  The game also now has a Spanish-speaking version.

Especially given PPM-sized cumes, many radio stations have the ability to expand their appeal, play the hits, and become more mass-appeal entities in their markets.  Too often, programmers overly-niche and narrowly focus their stations, thus ensuring "specialty shop" sized audiences.

Marketing - In spite of the success of the game, EA aggressively continues to market it, and does so in a very targeted way.  There are two dozen different television spots, for example, that are designed to reach advertising expenditures in the past year.

Like a lot of big brands (Apple included), EA realizes that its most popular game needs to be marketed.  In radio, companies often spend ad dollars only on startups or weak stations, rather than support some of the biggest stations in the country.  Of course, the current economic environment makes it virtually impossible to market at this time, but when the recovery occurs, radio would do well to put some support behind its biggest and best brands.

It is always fascinating to watch how some of the best marketers in the world treat their most successful products.  There are lots of lessons to be learned from EA's Madden strategies and tactics.