Has Mark Ramsey Missed The Point? 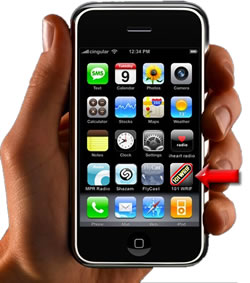 Mark's a good friend and a great observer of the media landscape.  But in this morning's blog, he disparages the individualized radio station iPhone application, and instead, lauds RadioShiftTouch, an app that he says can get any station anywhere - for $9.99.  So, you can get thousands of radio stations - terrestrial, streaming, etc. on your iPhone...

Versus your station - for free - on your iPhone, alongside Pandora, YouTube, Google Maps, and AOL Radio.

As Mark points out, "The iPhone is not about you, it's about your audience and what they want."

Precisely.  And our nationwide Tech Polls continue to show that your audience wants to stream your station on their computers and handheld mobile devices.  Yes, some of your more adventurous listeners might want to seek out that Ska station from Ireland, or a station they grew up with back in Omaha.  But by and large, they want to be able to - simply - find your station on computers and phones, and listen whenever and wherever they want.

Big aggregator sites that offer thousands of stations aren't about the listener - they're about making lots of money by combining many, many stations together.  The tyranny of choice is one of the reasons why satellite radio is failing.  While subscribers have a couple of hundred stations available to them, the fact is that most people just tune in a handful.  Similarly, that's the way most of us watch cable or satellite TV.  We find our handful of favorites, and that's where we gravitate. The fact that there are hundreds of available stations is irrelevant to most people.

But even if you believe there's value to being a part of a Wal-Mart "big box" site, there are cheaper ways to be there, such as FlyCast (free) versus having to pay $10 for RadioShiftTouch.  Most iPhone owners aren't crazy about paying for most apps to begin with, and this one's more expensive than most.

So an app that contains hundreds or thousands or an infinite number of streaming stations for $10 isn't really a service to most consumers.  In fact, it's confusing and relatively expensive.  A real service to your listeners is making it easy to receive your station on popular handheld devices.

I frequently agree with Mark about most things digital and media.  But not this time.
And by the way, why wouldn't stations want both - their own individual icons on iPhones and being a part of aggregated sites?

Full disclosure - we are selling individualized iPhone apps, they are selling fast, they are working wonderfully, they are positively reviewed by consumers, and we couldn't be happier to be able to bring this service to an industry that could use a little good news.

Clearly this is not an either/or proposition. It's BOTH/AND

Stations should have station only mobil apps available. These are clearly for our true fans.

Stations should also make sure we are included/available amongst the array of choices the growling number of aggregation type apps offer. This is for discovery and for our casual listeners.

listeners engage with us at different levels of interest, so a multi-dimensional strategy is the key.

Hey, I've given you an opportunity to promote the service!

I wasn't so much promoting a $10 service as I was promoting the idea that a one-stop shop has its merits, as AOL Radio and Flycast and Pandora prove for free.

I think it's FINE for stations to do this, Fred! And I'm not at all surprised that many want to. Well done, Fred. It's a great idea.

But my essential point remains. Stations have got to wake up to the proposition that being worth finding is more important than being the only game in town.

I agree with both Mark and Fred. Since Mark himself has written many times about "too much choice," I think of the individual station app on an iPhone (or any phone) as a "button" for that station on your new "radio." And the apps like RadioShiftTouch (or Wunder Radio, which I like even better) are filtered tuners. They both have great utility for listeners.