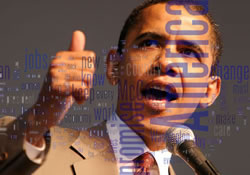 Our words matter; more than we think.

Policy and X-factor aside, historians and strategists are trying to pinpoint exactly how and why Obama won the ’08 election.  I don’t claim to have the answer, as I believe there are many reasons, but I think his words were a major factor.  And that’s something Radio should consider – the words that stations use to describe themselves and their brands.

Team Obama is full of brilliant marketers and campaigners, and they knew that to truly represent “change” and achieve victory, Barack needed to say things differently.  His policies weren’t necessarily that far apart from some of his competitors, but his words were from another world…or generation.  This led to some of his critics claiming he was nothing but a great speaker.  While he’s is indeed a fantastic orator with a strong presence, it was his words that truly made his speeches great.

In addition to himself, Obama had up to three speechwriters on the trail.  The oldest being 30, with the other two in their mid-20s.  Think about that.  Obama didn’t hire the usual gray haired, out-of-touch, political hacks who would have probably cranked out the same ole speeches we’ve heard from every other candidate over the years.

As I travel the country, fixated on listening to radio stations and what they say about themselves, it strikes me that most promos, liners, DJs, sound effects, voiceover guys (and girls), and even formatics, regardless of format or demo, all sound pretty much the same.  Literally, I hear Alternative and Active Rock promos with virtually identical language and voice as the Classic Rock and CHR stations.  And I hear many DJs that have no connection to the music, demo, or market.

This needs to change if radio is to become less predictable, more relatable, and more meaningful in the overall media scheme of things.  And it’s even more important when stations are locked in a music battle.  In cases like that, the words used may be the silver bullet.

As you plan your market domination strategy for 2009, think about all of this.  If you’re programming a station for 18-34s, why not have an 18-to-24-year-old write the copy – not someone in their forties.  If the target is females, think twice before giving the golden copywriting pen to a man.  And if morning show talent is older than the demo, get some age-appropriate staffers to help plan the strategy, some of the content, and the language and tactics.

Finally, there should always be some in-demo listeners, not just jaded staffers, who are asked to participate in music and creative meetings.  Now more than ever, radio must include the demo and speak their language.