Jacobs Media's Keith Cunningham weighs in on the immediacy - and impact - of Social Networking on the news & current events:

Think back to last week when US Airways flight 1549 splashed into the Hudson River.  While the heroism of the pilot and rescue workers has dominated the headlines – and deservedly so – I can’t think of a recent event where the terms “new media” and “citizen journalism” have become so intertwined and so crystallized.

In the first minutes after the crash, thanks to Twitter user Janis Krums, the world was able to see the first images of the crash. And The BBC reported that while the TV networks were still trying to find the plane, Krums’ photo had already been uploaded and viewed in China, Iran, Japan, Germany and Norway.  How’s that for scooping the media? 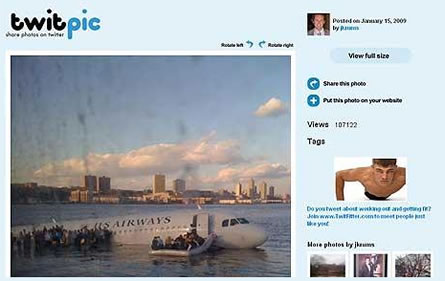 We spend a great deal of time writing about technology and new trends in this space.  And whether one is programming a radio or TV station, running a magazine or marketing a brand like Nike, understanding the power and opportunities new technology represents is a growing necessity.

“New media” and “consumer generated media” aren’t esoteric, pie-in-the-sky concepts.  All of today’s radio leaders should be strategizing about how Twitter, Facebook, iPhone apps, video streaming, texting, and all things technology can be integrated into their strategies.  And don’t forget the listener.  Each station has thousands of Janis Krums out there who are more than willing to become citizen programmers.  Radio’s historical top-down mode of broadcasting is being pushed aside by consumers who want a seat at the table.  We called that “neo radio” a number of years ago.  Today, it’s just the way it is.