« All Atwitter | Main | The Day The Radio Industry Stood Still » 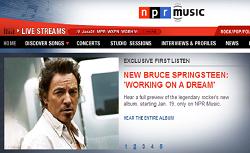 While Classic Rock stations argue about whether they should expose a Springsteen track from the much-awaited new album, Working On A Dream, or Triple A's debate whether they should play the single two or three times a day, and Active Rockers ignore it all together, NPR has figured it out.  And in the process, they've become "The Bruce Station."

Last weekend, they streamed the entire album, song by song, on their website.  And they're the only media outlet that broadcast Bruce's concert at the inauguration celebration this past Sunday. 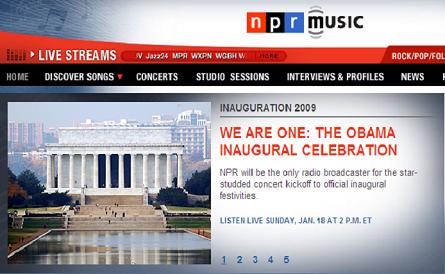 We can talk about Pandora, and exposing music on sites like MySpace and Facebook, but the fact is that another terrestrial entity - public radio - has lapped Rock Radio.  When talking about NPR, I occasionally hear people mention that old Alec Baldwin bit on Saturday Night Live, featuring the two female "NPR hosts."

That perception is about as relevant today as the notion that South Korea would never build quality cars.  Between shows like "Fresh Air" and news magazines like "Morning Edition" and "All Things Considered," NPR regularly showcases Rock better than... Rock stations.  And along with NPR's great music website, NPR and public radio are well on the way when it comes to hammering out a viable and credible music position.  They're more than happy to give us shock jocks and Rock Girls.

Once again, another right on post. The first paragraph alone completely nails the crazy environment we live in....

NPR Music has recognized the opportunity that some (many?) heritage rock stations and even Triple-A stations have completely lost site of. I am in a market that has unique historical ties to The Boss and we have loyal listeners who pay attention to Bruce regardless of whether he does a Pete Seeger record or an E Street Record.

The bottom line for me as a programmer is that as an artist Bruce continues to touch my listeners and out of respect to our mission and to Bruce as an artist we continue to support him. Would I feel differently if I was at more defined format at a commercial station? Maybe. But luckily I don't have that problem.

The internet poses great opportunities to commercial stations to extend their brands and if they use their content in the right way and promote it in the right way, even the most conservative classic rock station can own The Boss - even with never having to play one second of any of his new releases.

Commercial radio has been lapped by many folks, not just NPR. NPR succeeds because it consistently offers interesting programming. It may not always be your individual taste, but it is more compelling than the typical commercial radio station.

Somewhere along the way, radio seemed to lose the entertainment portion of their programming model. They were and are so concerned with billing, that they failed to find new ways to keep people interested enough to listen for any length of time.

There is a lack of terrestrial radio stations that will play new music from iconic artists. People like Bruce, Dylan, James Taylor and many others have been left behind by rock radio. I never understood it and never will. These people are the voices of our culture. Dylan has inspired many young people, despite the fact that they never hear him on the radio stations that they ONCE LISTENED TO. It is a fact, that the young adults of today simply don't listen to radio in the numbers that previous generations have. There are lots of reasons for this, but the main reason is that for years they failed to hear something they liked when they turned on their radio.

I think that the era of conservatism in broadcasting must end. It is necessary for programmers to find a way to make radio and for that matter television, compelling again.

I totally respect NPR for never losing track of their audience.

Bruce & Jim, thanks for the comments. You both are "stakeholders" in this discussion - Bruce as a Public Radio programmers, and Jim as an iconic label exec. Bruce, Public Radio has been true to its values, and that stability speaks volumes about the success it is having today. Jim, I can't disagree with your comments, but see it another way. Yes, Rock Radio moved on - for better or for worse. But Classic Rock radio might have been there for artists like Bruce, yet was often not even serviced on the music because they weren't playing the other new stuff being released at that time. Perhaps if the labels had better understood the fragmentation that was occurring within the Rock family, it would have been better able to serve stations that might have cared about those artists.