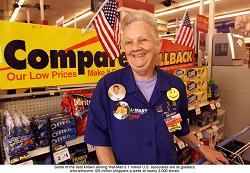 Less than two years ago when it was first released, the iPhone cost early adopters $600.  Now, these devices are just under $200, and Apple is doing everything it can to make them mass appeal mobile gadgets.

Last week's announcement that iPhones will be available in Wal-Mart stores changes the game, as the marketing rapidly moves from elite to mass.  iPhones have been on sale at Best Buy, but now Wal-Mart's footprint changes everything.  You're going to start seeing them show up in some less-than-expected places in the palms of all sorts of people, in spite of the lousy economy.

If you don't believe in the power of Wal-Mart as a sales distribution outlet, talk to Irving Azoff, who has used the power of that discount chain to generate massive sales for both the Eagles and AC/DC.  If you have a particular image of Wal-Mart, think again.  When Wal-Mart generated sales of 1,000,000 CDs for AC/DC's Black Ice in just two weeks after its release, you better believe Steve Jobs was taking notes.

No CEO is more image conscious than Jobs when it comes to his products' look and placement.  Apple stores are known for their aesthetics and customer service.  But Jobs also "gets" mass appeal, and while selling iMacs is still an uphill battle, the iPod's domination over the past several years is evidence that Apple is taking no prisoners.