The Walls Come Down 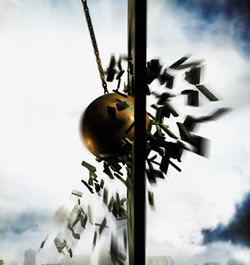 Because of heavy use of weighting in PPM, four panelists gave WBLS, New York an average weekly cume of 23,300 listeners in Atlanta when they went to the Big Apple for Thanksgiving.  The following week New York's "Power" WWPR-FM had a similar fate.  PPM critics say it calls into question the reliability of the sample.

A few years ago - pre-"Bedroom Project" - Arbitron hired us to conduct focus groups among 18-34s with the goal of better understanding how they use different media and how location listening is changing.  Back then, Dr. Ed Cohen and the team were attempting to get a better handle on the terminology that young people used to describe various media and gadgets, as well as to gain an understanding of how entertainment and information consumption was changing.

Fast-forward to today, and it is clear that technology is rapidly impacting the way that listeners consume media, while providing them with more listening and viewing options.  The Arbitron story could head in many different directions, too.  There's ethnic weighting and representation, the blurring lines of metro designations, and of course, the ways in which consumers hang onto their cell phone numbers even after they move to different cities.  These types of factors all play roles in the ongoing difficulty of measuring listening and media consumption.

As more and more "radio" listening takes place on mobile devices, and as stations continue to offer their streams in multiple locations, their reach will transcend the city limits of their terrestrial signals.  We are beginning to receive the metrics from the iPhone apps for individual stations that we are marketing, and the data is startling.  We are learning that iPhone owners relish cool new apps, and of course, participating stations have the ability to drive downloads among their local audiences.  But we're also seeing that a substantial percentage of these apps are being downloaded outside of the U.S., in Russia, Canada, England, France, and hundreds of countries worldwide.  There are people listening to WRIF in Moscow, KLH in Winnipeg, and The Hog in Madrid.

Today, this PPM story has no real impact on sales or programming.  But in a couple of years - when we're all running around with an iPhone, Google Phone, BlackBerry - all capable of receiving stations from around the world - and from your metro - how will companies be able to aggregate this listening to create a new sales, marketing, and revenue model?

We have been promoting the concept of additional platforms for years now.  No longer are broadcast stations limited to the reach of their transmitters and towers.  A radio station in Peoria can truly become a global entity.

Of course, the downside of this expanded reach is a much greater competitive arena.  Whereas it once was "good enough" to be able to effectively compete in your local market against the guy across the street, what will it take to be worthy of listening in an environment of virtually limited competition.  As American broadcasters tighten up their expenses and continue to cut back on resources in the short-term, the competitive long haul isn't all that far down the road.