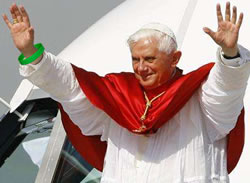 When I read those Dan Brown novels - especially Angels and Demons - I couldn't help but be taken aback by the mystique and history of the Vatican and, of course, the Pope.  But the 21st century reality of his holy highness is that the guy "gets" interconnectedness" and multi-platform communication.  While you may think about Pope Benedict XVI as droning on in Latin in front of thousands of worshippers in St. Peter's Square, think about email, texting (the prayer of the day), Facebook (the Pope has a profile), and cable television and Vatican radio - because the Pope uses them all to send his messages to Catholics - and others - worldwide.

The newest innovation is YouTube, and the pontiff now has his own channel (so does President Obama, by the way), which the Vatican says they will update daily.  Why?  Because as Monsignor Claudio Maria Celli, leader of the Vatican's social communications office, puts it, Benedict is "a man of dialogue."  This effort via YouTube, however, has a higher calling.  Monsignor Robert Wister, a professor of church history at Seton Hall points out, "It's a way of communicating the church's message beyond the members of the church."

Or expanding the cume.  If a 2,000 year-old institution like the Pope can use all these multi-platform digital communication tools to get his message across, what's stopping many radio stations?  Why is video taking so long for stations to integrate on sites?  Why aren't stations and DJs more present on social networking sites?  Why hasn't radio become more involved in gaming, especially the games that include music?  Why are texting programs sporadically used?

And when are program directors going to start thinking of themselves (and being considered by their companies) as Content Directors?

W.T.D.A.?  The Pope has more than answered the question.

And for many of you, I'm preaching to the choir (if the Vatican will excuse my expression).  But when you consider how a centuries-old icon like the Pope is reinventing himself via digital resources, the fact that radio is less than 100 years-old suggests that we're not too old to start thinking broader ourselves.  As Monsignor Celli suggests, the Pope wants "to engage with people wherever they are."  Amen.

The Vatican's recognition of changing times is impressive.  Hopefully, radio will start realizing that there's more to content distribution than transmitters and towers if we truly have faith that our content is still worthy.