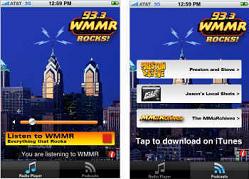 As of this writing, our 15th iPhone app has rolled out, generating thousands of downloads, and I'm finding myself listening to more streaming radio than ever.  Of course, new media is a learning process, and I'm absorbing lots of new material.  Please permit me to share a few takeaways with you.

1. The sound of your stream matters - a lot.  No longer can broadcast stations expect to get by with a mediocre-sounding stream.  Just as your audio chain was a difference-maker back in the day when consumers could only receive FM stations, your streaming quality and reliability are critical in the new media world.  Don't pay us for an iPhone app or use an aggregator site if your stream sucks.

2. What you're programming in the commercial "holes" is critical, too.  Similar to the logic expressed in the previous "takeaway," you can no longer get by with the same 3 PSAs, the same repetitive promos, or other material that screams that you don't care enough about your streaming audience to bother to program these segments.  It's time to address this issue, either by selling more advertising (not a bad idea), or with programming that has entertainment value.  By being available on computers and mobile devices, you are no longer competing with Z95 or Jack-FM across the street.  You are now up against thousands of online "stations," and your advantage of being the local station that everyone knows will run dry if you don't care enough to take care of your streaming programming.

3. You have the ability to make listeners very happy.  As we're seeing in the reviews of the iPhone apps from real listeners, making your product available in more places is a positive.  We have seen statistical evidence of this in our Tech Polls, but now it's more than evident in the anecdotal stories that consumers are writing in iTunes reviews.  They are there for everyone to see, and there's nothing more gratifying than letting your audience know that you "get it," and making them feel like you've given them something of value - for free.

4. Radio still works.  And it works very well.  We are beginning to get app download stats for participating stations, and they are impressive.  While you would expect big-brand stations like WRIF to generate thousands and thousands of downloads (and they are), it is often smaller-market stations like Hot 107.9 in Ft. Wayne or WTMD (a public radio station in Towson, MD) that are driving some great download numbers, too.  This continues to suggest to us that radio's cume reach and trust level with listeners remains solid.  When we ask listeners to check out a feature, a program, or some other offering online, or in this case, on their iPhones, they are very willing to comply.  At times, we're amazed at how many iPhones that have been sold in local markets, and how well our clients are able to entice their owners to download their free apps.

5. The Internet has ushered in a different type of competition.  Broadcast radio operators have to stop thinking merely about stations across the street.  As we're seeing with our iPhone app program, the big dogs like The Hog in Milwaukee or WMMR in Philly jumped right in.  More big name stations are already signed up.  Great stations realize they have to keep pace, and offer their listeners the newest and best access features.  But we're also seeing that the little guys, like The Coast in Mendocino, are on-board, too, earning them parity with the aforementioned major market players.  And for the first time ever, they now have the ability to compete head-on with the biggest and the best.  As I am finding, their programming is often more than competitive with Top 10 market stations.  In addition, Internet stations like KUJO 99 (a streamer out of Dallas that actually plays just about everything) or Hard Radio (another streaming station that lives up to its name) now live right alongside the biggest commercial stations available on iPhones.  And by the way, even Internet stations drive tons of downloads, providing them with an equal footing on iPhones.  Broadcast radio is going to have to maintain its quality even in these challenging economic times, because the competitive forces have become exponentially more intense.

6. Mobile access is indeed the future.  OK, I'm hearing all those "Duhs" as you read this.  But while we've been preaching this for several years now, the reality hits home when there's a cool mobile phone in your hand, and the elegance and simplicity of a tool like Apple's App Store is at your fingertips.  Realizing that the entire apps business is still evolving, you can see that free apps that can be downloaded in literally seconds is a very compelling come-on for iPhone owners.  As I plug my iPhone into speakers or grab my ear buds, there's a great deal of entertainment coming out of this cool device.  In many ways, it takes me back to that first Walkman experience in the '70s, and it's exciting that good old traditional radio can be a part of something new and cutting-edge.

7. iPhone app creativity is virtually limitless.  One of the great things about being a consultant is how often we can introduce a basic idea to clients, and then watch how many of them bring great enhancements to the table.  That's been the case with promotions like "Workforce," for example.  Well, the same forces are in play with these iPhone apps.  Many programmers and digital directors have already come up with modifications, changes, and other ideas that will only make these apps more interesting, entertaining, and useful over time.  It is gratifying to work with many radio professionals who continue to bring clever ideas to the table.  Our apps are already involving, incorporating features such as texting, podcasts, and more.  Keep it up.

8. The app graphics are cool, attractive, and getting more interesting by the week. While some stations are using their basic logo (nothing wrong with that), others have taken the opportunity to create some interesting visuals that are compelling.  When you look at them in aggregative, it's almost like walking through a radio museum.  It's impressive that broadcasters - terrestrial and Internet - are putting so much into "the look" of their apps.  It's another indication of creativity... and pride in their product.  Both are welcome qualities.

More lessons will be written and learned as we go through this process.  Thanks to those of you who have already jumped on board for what has already been an interesting and rewarding ride.  And for those of you who want more information, just click on the link.

In my recent ethnographic research project with 13 undergrads at Drexel University, only one of whom listened to "traditional" radio in the last week, 10 of them proudly held up their iPhones and said the only problem with them was that they couldn't hold all their music on them. And then they all very coolly exchanged their favorite radio apps and "hey, did you know that you can get 'MMR's podcasts also?" Yes the mobile revolution is here, and duh, your post lays it out pretty clearly. And if anyone in radio doesn't trust some "consultant" just talk to "the people" - they will tell you what the heck is really going on. I'll tell you this, my 12-year old who has an iPhone knows more about this that I do. He's available for your next focus group!