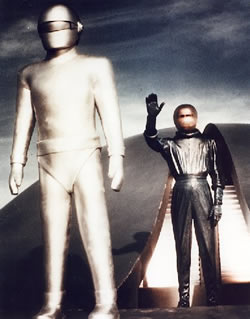 While the body count numbers continue to roll in, and AllAccess does the tallying (amazing their server hasn't melted down), the much-rumored Clear Channel cutbacks, layoffs, and axings have finally been announced.  Mark Mays reports it will amount to a 9% reduction in the company's workforce. The fact they chose to hide behind Inauguration Day is no accident, if not ironic.

Nonetheless, everyone in radio is taking notice, and wondering about the implications.  So, here is some instant analysis, and like all good blogs, these observations are open for your comments (just click below).

This could become an epidemic, empowering other CEOs to follow suit, and institute similar staffing reductions. After all, if Clear Channel's doing it...

But maybe it would be wise to step back and consider that this is the same company that instituted Less Is More, "collective contesting," and other innovations that haven't worked.  Nor have they made radio more attractive to consumers or profitable to Wall Street.

The "Clear Channelization" of radio has been the ugly brush that has fostered increasingly negative perceptions of the "radio brand."  When you think about why regular folks chastise radio for a myriad of sins - both real and imagined - consider the source of their opinions.  I'm sure that the news media - from The New York Times to The Wall Street Journal to CNBC - are all reporting on these "reductions" this morning.  So the negative PR will indeed continue, hastening radio's diminishment in the media world.

So, if Clear Channel's slashing gives other companies the rationale to make similar cuts to their workforces, perhaps some alternatives ought to be considered.

If you compete against a Clear Channel cluster, there will be likely many fewer salespeople to compete against.  Their weakest stations will become even weaker, and a savvy, professional staff - with decent morale - ought to be able to compete effectively against them.

And if you're on the programming end, you know that your competition is likely to become more nationalized, and thus, less tuned into what's happening in your town.  This is the time for your station to make a difference locally, to become a more significant part of your community, and to put the "local" back in "local radio."  In a Pandora-ized world, that's not a bad position to pursue anyway, and Clear Channel may have just made it even easier for you.

You also will have some talented, dedicated radio people from which to choose.  While no one is apparently hiring at the moment, the fact is that some very sharp professionals are on the street.  Good stations have the opportunity to become great.

So, if Clear Channel is doing it, maybe that should tell you something.

Following the leader was never a worse idea than it is today.

Here is the text of Mays' letter to Clear Channel employees: 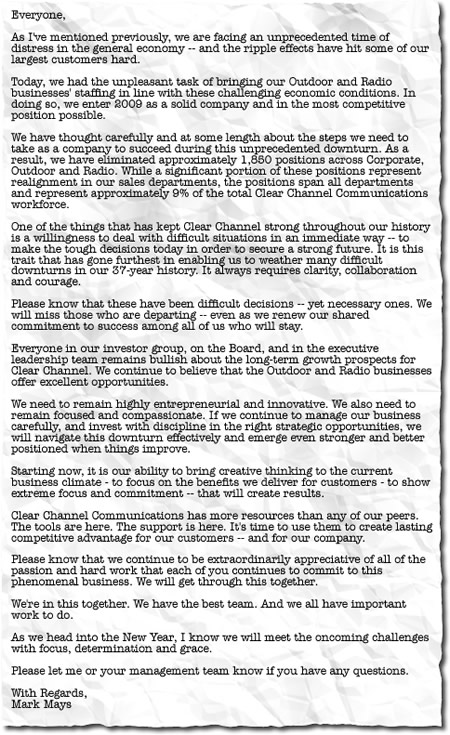 AM/FM radio with a robust website can be a powerful local community connection. The reach of a broadcast signal and a local sales force are together powerful tools only you have. MySpace/Facebook operates small personal circles. Galactic Google search marketing only delivers a few clicks each day to each local merchant. AM/FM radio+website can connect the community and build a robust business between the internet giants. The one-way radio broadcast signal by itself fails to establish a connected community. Build out your website with video, texting, IM, Twittering, comments, sharing, links, and connect your community and yourself to success. Or, follow CC.

The Mays family apparently decided that while the chess game known as radio still had some moves left, the game was over. They took the money and ran - pure and simple.

There is no way that they (probably the private equity buyers either) could think that what they are doing could stabilize radio and leave the business that has already lost over 30% of its revenue and listenership in a position to survive.

In fact, what CC just implemented on a large scale has been beta tested in a piecemeal fashion for years - and the results (previous paragraph) are there for the examining. When competition gets stronger and you get weaker, well, do the math.

Fred is dead on - the CC model has not only not worked, it has been the single biggest contributor to radio's fall - but it would be unfair to lay the blame solely on them.

Much of radio's top management has been more than happy to collect large salaries and bonuses while simultaneously slashing their companies to pieces. Had they been willing to get by on say, a million or two a year, many, perhaps most of the cuts could have been directly avoided. The bonuses collected in late 2008 by The Mays brothers, Lew Dickey and Alfred Liggins seem particularly egregious, transparent and fatuous (3 for 1 sale on adjectives today...sorry!), but there are many others buried in proxy statements from the past few years.

There is no reason to assume that the heads of radio companies would behave any differently. But there is also no reason to conclude that these are beneficial pieces of "re-engineering" that will leave radio as a sustainable medium, much less one that can grow.

Clear Channel is now a "sleeping giant" that just rolled over - probably for good. This is an excellent opportunity for all other operators in all Clear Channel markets. Lets see which ones are truly radio operators and which one are Wall Street Monkeys