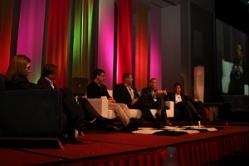 As mentioned in an earlier blog, I attended Radio Ink's tech conference a couple of weeks back.  The strong turnout was one of the most impressive aspects of the event.  At a time when companies discourage convention attendance for any number of reasons, a big meeting room was jammed for two full days.  It is a tribute to Eric Rhoads and his staff, and to everyone who found a way to get to San Jose for this conference.  Obviously, there are many radio professionals who are still searching for answers, trying to learn how to integrate technology into this industry of ours.

As enlightening as some of the panels were, however, I couldn't help but wonder how radio is going to turn that next big corner and truly reinvent itself.  As we watch venerable media outlets like The New York Times struggle, as hundreds of magazines fold, and as Sirius XM flirts with bankruptcy only to be bailed out at the Eleventh Hour, radio is still groping for answers.

It was noteworthy that many of the smartest professionals in our industry are groping around, and trying to unlock the monetization key.  While it is clear to just about everyone that streaming, access on mobile and Internet devices, and texting are all mandatory at this juncture, how to get it all paid for continues to be the mystery of mysteries.  Panelist after panelist circled around the issue, but there are painfully few war stories that broadcasters can simply take home and plug in to their markets.

Maybe part of radio's "answer" is to get back to where we once belonged.  It was interesting to me that amid all the gadgets and technologies, several of Convergence's luminaries talked about the importance of being local and making a difference to listeners and communities.  Both Guy Kawasaki and Craigslist's Craig Newmark talked about this value, especially as it pertains to customer service.

And it was also interesting to me that both of these Silicon Valley geniuses have their terrestrial radio favorites.  For Guy, he couldn't stop talking about Classic Rock K-Fox and morning guy, Greg Kihn.  And for Craig, he went out of his way to laud radio podcasts, and mention NPR's "On the Media" - a show he said he'd pay to listen to.  These are hi-tech mavens who could occupy their time with a myriad of new content offerings, but in each case, they love aspects of broadcast radio.  And Gordon Borrell reminded us, once again, of the power of radio's cume to drive thousands of consumers to any number of websites.

So, I left Convergence with mixed feelings.  On the one hand, too many smart people recognize radio's promise, but in the process, warn against losing that local, community identity.

Local towns and cities are especially hurting these days, and it's hard for us not to notice those among us who are out of work, restaurants and local businesses that are closing, and factories that are shuttered.  There's never been a better time for radio to turn its focus to the communities and towns that supported us all these years.

It may be a case of doing well by doing good.

When the leader assumes they (generally he) must have all the answers, the problems rarely are solved. It's amazing how much your 25-year old web manager knows. Check out their Facebook or MySpace pages. They can do magic ... if you'll let them. They can get you into the digital flow with Twitter, video, and other social tools. Let loose and fly.

Yesterday the news reported that Home Depot had better than expected financial results. In the midst of the home sales slump, are smart home sellers making their homes more attractive to buyers? Of course.

One of the sacred cows of radio in general and rock radio in particular is "loudness". Has that been researched? Is it more attractive? I doubt it. It's your radio programming that attracts your audience and your lack of audio quality that sends them away.

In my experience stations who are true to audio quality will enjoy wider success as their great programming ideas won't be turned down or ignored because of their loudness and distortion.

Record producers have been cranking up the loudness on CD's for a decade or more and their sales have been falling. Is this simply MP3 erosion or could loudness be a factor?

My re-mastered Led Zeppelin greatest hits CD has convinced me to NOT buy re-mastered product which is another way of saying, "we put some radio style processing on it."

The radio industry that worries about being louder than the competition as a way of making radio more "attractive" to listeners is trying to get better results by repeating the same mistakes.