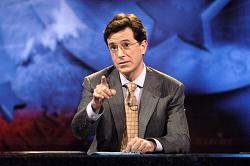 Check out "The Colbert Report's" interview with Sir Paul, a truly funny piece of video that is enjoyable for any Beatles fan to watch.  That's an interesting observation since I've personally seen and heard countless interviews with McCartney over the past 40 years.

But this one's different because Colbert is funny, and he and his staff took the time to do something out of the ordinary with McCartney.  In fact, that's probably the way they approached it in pre-production - everyone's heard McCartney interviews - how can ours be different, memorable, entertaining, and buzz-worthy?

Too often in radio, the hard work stops with "the get."  We're so happy to have a big name lined up, that the energy and creativity necessary to make the interview a major moment for the show ebbs out of the process.

If you think about some of the best interviews you've ever heard with celebrities, something different happened to set them apart.  A number of years ago, I heard a show set up an interview with Rick Wakeman from Yes.  Neither guy on the morning show team knew much about Yes, so they let a cousin who was a Yes fanatic handle the questions over the phone.  It was just different enough to be interesting.

It's what's made the Letterman show great, and it's what Colbert and Jon Stewart do every week.  Radio's morning shows and personalities may not have the flexibility to take a different approach on every interview, but the process would add so much to the perfunctory celebrity Q&A.

The other side of it is that most celebrities are sick of interviews, too.  Why?  Because they typically get the same questions, over and over and over.  Most of them would play ball with a personality who actually wanted to try something a little different.

It's a way for local radio personalities to stand out, and continue to remind listeners why there's more to being entertained than what they hear on their iPods and Pandora.

Steven Colbert is a genius! And you are correct, great post!