JacoBlog - Jacobs Media's Blog: All I Wanna Do.... Is Stop Playing Your Records!

All I Wanna Do.... Is Stop Playing Your Records! 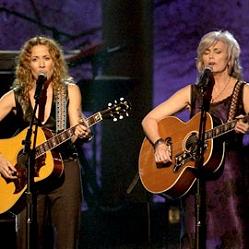 The insanity in the music business continues as artists like Sheryl Crow, Emmylou Harris, and others testify to Congress about how they aren't getting their fair share from radio.

Has everyone lost their collective minds?  On the one hand, Crow recently played a private concert for Northern Trust (yes, a bailout money recipient), and you have to wonder whether those uptight bankers would have even known who she was if not for all that radio play she's received over the years.  The same is true for every touring band that makes its living during the summers playing sheds, and in the colder weather at theaters all over the world.

It wouldn't be so crazy if radio didn't provide so much support for artists - more than any other medium or outlet.  Our Tech Polls continue to tell us this truth.  For the survey that's currently in the field (with more than 17,250 respondents already tallied), we used a different question than usual.  Instead of just asking the primary way that listeners are exposed to new music (which radio always handily wins, by the way), we asked about all of the sources and outlets in an effort to be fairer to some of the newcomers in the music/media world.  This allowed respondents to check as many different options as apply.

And the result (again with about 70% of "precincts reporting"): 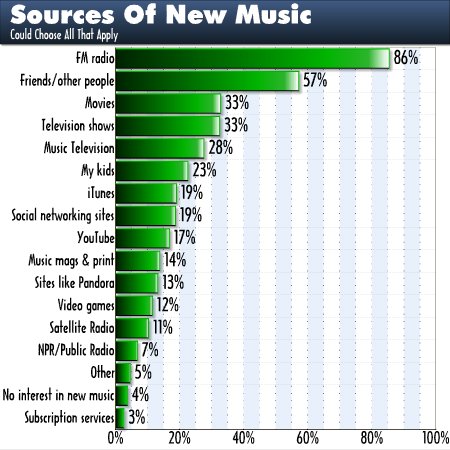 Now I know what you're thinking - these are radio listeners - what else are they going to say?  Well, since 90% of the U.S. are "radio listeners," that covers a lot of people.  But you may argue that these people are all members of email clubs, thus making them more core to radio.  Fine - then knock 10 percentage points off radio's totals.  And that translates to three-fourths of rockers who say that radio plays a role in exposing them to new music - more than twice as much as the next media source.

And where do you see satellite radio, Pandora, and even iTunes on the list?  They are all well down the pecking order, which should come as a surprise to no one - except these musicians who are whining about receiving their "fair share."

Sheryl, Emmylou, Patti, and all the geniuses at musicFIRST:  Do you really want to mess with this arrangement?  Do you really want to start making it next to impossible for many commercial stations to continue playing your music?  Take it from someone on the deep inside of the business.  If radio CEOs are willing to initiate the types of harsh cuts they've made in the last year, they will most certainly scuttle music formats if they become financially impossible to justify.

In "Radio, Radio," Elvis Costello intoned "I wanna bite the hand that feeds me."  Of course, he had every right to write that lyric and release that song.  And radio had every right not to play it.  But over the years, Elvis Costello still received a ton of radio airplay, from the "fools" who run the business.  He protested all the way to the bank.

Patti La Belle testified that "I never thought I'd be standing here asking for my money."

Well, you shouldn't be.  Radio was the main driver that helped tell the world about your talent.  To Sheryl, Emmylou, and Patti, if you want to get paid your fair share, start touring around the country and visit a couple of hundred radio stations.  Thank them for all the airplay you've received over the years, and while you're at it, thank all those fans who bought your music.  By the way, a little promotion and effort on your part will sell a helluva lot more CDs, and it will connect you to the valuable communities that radio has built and created over the years - at no extra charge to you.

These are trying times, and everyone in media is struggling to reinvent their businesses.  But for musicians to lash out at the best source of exposure in the history of entertainment that has made the biggest contribution to exposing their songs and personas to the world -  now that's just biting the hand that's fed them.

Maybe we should send the artists a bill for the airplay. Each song at a very conservative $50.00 a minute every time it's played. It is, after all, a commercial for the artist isn't it.