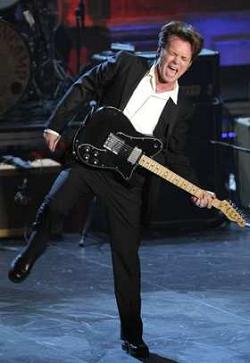 I have heard from many broadcasters during the past week or so since we initiated our "Going for the Gold" campaign.  Not surprisingly, radio professionals pretty much line up on the same side of the fence on the performance tax issue - perhaps one of the few instances where this is the case.  If you didn't read promotional pro, Jim Cahill's wonderful piece about the record and radio relationship, I have it below.

But today's blog comes right from the heart of the recording industry - a great essay called "The State of the Music Business" that appeared in The Huffington Post, written by none other than John Mellencamp.  Now here's a guy who knows about what it means to get jacked around by record companies.  Remember, he was originally branded as Johnny Cougar until he eventually won the right to use his real name.

In this post, Mellencamp talks openly about the mistakes of the corporatized record industry has made over the years, and now is in the process of blaming everyone else for its problems.  Here's an excerpt from his post where he talks about the influence that getting a song on the radio had on his career:

"Early in my career, I wrote and recorded a song called "I Need A Lover" that was only played on just one radio station in Washington, DC the first week it came out. Through much work from local radio reps at the record company, the song ended up on thousands of radio stations. Sing the chorus of "I Need A Lover." It's not the best song I ever wrote nor did it achieve more than much more than being a mid-chart hit, but nevertheless, you can sing that chorus. Now sing the chorus of even one Mariah Carey song. Nothing against Mariah, she's a brilliantly gifted vocalist, but the point here is the way that the songs were built -- mine from the ground up, hers from the top down."

As you read Mellencamp's well-written post, it's hard not to think of an industry that's guilty of self-inflicted pain, now trying to lay the blame on an old friend.  After decades of following the money, the recording industry finds itself looking desperately around for anyone with a little money left.  Of course, they haven't checked radio's wallet lately.