Going For The Gold

Last week, we posted a blog, "All I Wanna Do... Is Stop Playing Your Records!," about the absurdity of musicFIRST and various recording artists in their efforts to extract money from radio in the form of performance fees/taxes.

The blog struck a responsive chord.  We heard from a variety of radio people, angry about the obvious contradiction of this ill-conceived campaign.  Radio's contributions to the music industry in general, and the careers of hundreds, if not thousands of recording artists, are obvious to anyone who knows anything about the entertainment business.

But the most interesting response was from NRG's Chuck DuCoty.  Led by CEO Mary Quass, NRG initiated an all-company campaign (thought of by our friend, Emmis/St. Louis' John Beck).  The idea is to have each of their music stations take digital photos of every gold and platinum "thank you" awards and plaques that the record industry has bestowed over the past several decades.  The message is simple:  How can music executives and recording artists even suggest that radio has ripped them off when they have consistently thanked stations in such a tangible form?

NRG's plan was to deliver these photos to the NAB, but after reading our blog, Chuck asked whether Jacobs Media could spearhead something larger - an all-industry initiative, designed to get hundreds and hundreds of stations involved.

So, this week, that's what we're going to do.  And we need your help.

We are asking every music station in the U.S. to set aside 30 minutes and take digital photos of all those gold and platinum records hanging on walls, in offices, and in studios - and send them to us.  Email them to: 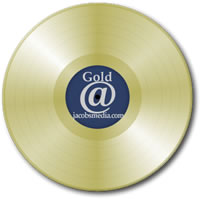 We will post them at a dedicated page - www.jacobsmedia.com/goingforthegold

David Rehr and the NAB are on board.  Once we collect these photos, they will be zipped and sent to Washington, D.C. for delivery to Congress and musicFIRST.

At this difficult time in radio, many people feel powerless to change the course of the economy, their station, or their personal lives and careers.  This is a simple, yet effective way to send a message and make a difference.

Please forward this post to your friends and co-workers, and let's create a positive, impactful, and compelling story for radio.

The most important thing any broadcaster can do is to contact their Congressman. HR49 needs more signatures. There are currently 135 signatures and we need 218 plus.

Congressmen/women need to know that the proposed fee/tax will be distributed 50% to the labels, 48% to performers, and 2% to muscian's unions. The labels have already collected 50% from the artists. Now they want an additonal stream of income so they can continue to collect 50% on-going. If it is a "Performers" initiative, why don't performers get 100% On another front, most performers have a piece of the "writing copyright". Thus, when broadcasters pay ASCAP/BMI/SESAC most artists that get radio play are also getting paid. Won't this proposal be "double dipping".

The proponents of this legistation are the labels and many older artists who were really shortchanged by the labels. Newers artists "want" airplay and do not understand what is being proposed.

Thank's for working on this. The biggest request is to get more Congressman signed on to HR49. That should be a major part of your request to stations.