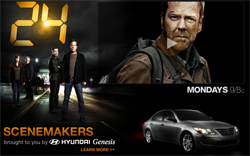 He can certainly get information out of Sangala terrorists.  And he can even weave his way through the labyrinth of Senate hearings.  But can he sell you your next car?  That's a good question.

Hyundai is moving Ford over, and integrating its brand into 24 in the hope of building awareness and moving some cars off those overcrowded lots.  If you were watching an episode a couple weeks ago, you couldn't help but notice Morris O'Brian's Hyundai Genesis (he's a very tertiary character who's the husband of Chloe).  24 showed a nice long shot of the car's information panel reveling a host of XM channels (he would have been better off listening to The Globe or WAMU) and a clean shot of the Genesis logo.

That's all well and good.  But will this 24 integration really sell cars?

Most folks don't buy their cars online.  It's still about local dealerships, and it's about getting recommendations from people you trust.  How much more effective - from both a sales and cost standpoint - might Hyundai be if they put together a program in the Top 20 markets, giving a Genesis to some of the top-rated radio personalities for a month?  From Pierre Robert to Trudi Daniels to Joe Benson to B.J. Shea, having a couple of live :60s on big morning shows for a few weeks would most definitely move cars, and improve perceptions about Hyundais.

With all due respect to Kiefer Sutherland and his wildly popular serial drama, it keeps you tuned in, but does nothing to extol the virtues of a car.  As advertisers are learning the hard way, product integration is nice, but is there really a bona fide return on investment?  Unlike just about every other advertising platform, radio personalities have intimate relationships with their local listeners (while they're DRIVING!), and can move product.

At a time when nothing's selling, radio continues to be a great deal.  Maybe you've cut back on HBO or you've dropped Sirius XM or you've stopped going out to the movies or dinner as much.  But radio?  It's still free, dependable, trustworthy, and ubiquitous.  For stations that continue to invest in their local personalities, and not go the network route, there are compelling sales to be made.

So Jack Bauer or your local morning show host?  It's a no-brainer.

You can never go wrong with taking advantage of a top-rating series to promote cars. Yeah, most people buy cars from dealerships around town, and most of the time, with recommendations from someone they trust. But in the long run, taking a shot at online ads or other forms of broadcast can help sell a car one way or another.