JacoBlog - Jacobs Media's Blog: The Year Of The App

The Year Of The App

That guy you see in the boarding area, frantically downloading another app on his iPhone, would have to be our Keith Cunningham.  Enjoy his guest blog:

There’s a recession going on, but you’d never know it by looking at what’s going on in the mobile device world.  The iPhone app model has totally changed how people use and perceive these gadgets.  Technology research company, In-Stat, predicts that these devices will grow five-fold by 2013, reaching the 140 million mark.  And mobile ad aggregator, AdMob, estimates that the Apple Store will soon be the biggest distributor of mobile content.

But if these statistics don't resonate for you, just look around.  I have personally witnessed total strangers on airplanes whipping out their iPhones, and comparing apps.

During the last few months of developing apps for radio here at Jacobs Media, it seems like the world is dividing up into two groups – those who have an iPhone and those who don’t.  If you’re in the latter group, you can only “get it” so far.  Impractical as it may seem (especially if you have an existing contract or you simply like the phone or device you carry), you should buy an iPhone, because there’s a change that happens to you when you get one.  And it really starts with your first visit to the App Store.

And to illustrate its power, consider the following images (thanks to Fortune) that say it all. 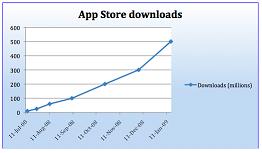 The iTunes App Store now has over 20,000 apps for sale with the numbers growing by the thousands each month.  And downloads will eclipse 1,000,000,000 this year.  Yes, that’s nine zeros.  Oh, by the way, the Blackberry version is coming, and it should perpetuate and expand on the Apple model. By the end of this year, every major brand, radio station, and personality will/should have a customized app for mobile devices.  I believe we’ll look back on 2009 as “The Year of the App” (I know – it sounds like a Bob Rivers’ parody of the old Al Stewart song).

To punctuate the absurdity or magnitude of App-mania (take your pick), a new 99-cent entry was recently released - "Nothing."  That's right, you can download "Nothing," an app that does... nothing.  Some of you are probably thinking Seinfeld or maybe even the Pet Rock craze.

And with visions of doing better, we began developing customized apps for radio stations and other types of brands last fall.  To remain truly competitive, businesses must live and thrive on multiple platforms.  A lot has been written about what makes more sense for radio - those big umbrella apps like iheartradio or our "stationalized" apps that simply offer your station on the iPhone desktop.  If it were me, I'd have them both, because mobile access of your station on these insanely hot devices is obviously where it's all heading.

See you in the App Store. (What’s your favorite app?)