I was recently in Toronto at a meeting about iPhone apps (apparently, a recession-proof business), and was startled by the skyline.  I'm not talking about new building construction (which is happening, by the way), but by the number of radio station billboards I spotted in a short period of time.  It was like going back 20 years in time when American radio was an active, vibrant business that had a proud place in the media lineup. 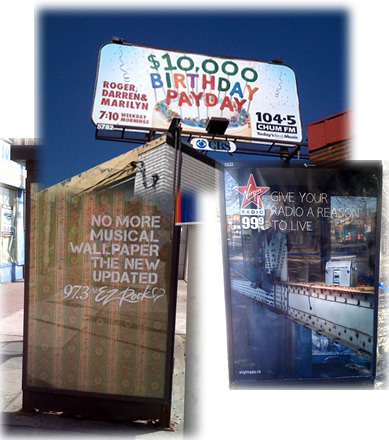 But in this tough environment for radio here in the States, marketing dollars are somewhere between scarce and non-existent.  Yet, many stations have viable promotions and personalities and formats to promote.

Clearly, the days of flying across the country to cut a new TV spot are over.  And those mass billboard campaigns seem like just a dream.

Stations have to get smart.  And last week, while perusing my online Detroit Free Press (as you probably have read, home delivery is now down to just three days a week) trying to figure out whether the Lions might go after Jay Cutler, I ran across this banner advertisement: 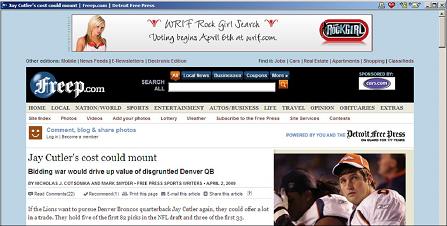 I get it - a great tactic for reaching me while I'm sitting right in front of my computer, and of course, clicking on the ad took me right to the WRIF Rock Girl main page.  Immediacy.  Accountability.  Targeting.

A decade ago, I was involved in a startup called FastBlast that had the right idea, but sadly, the timing was a bit on the early part of the curve.  FastBlast provided radio stations with the ability to geotarget web audiences with banner ads that promoted contests and promotions on sites that listeners frequented.  We ran more than a dozen of these campaigns, and most moved the ratings needle.  The Internet crash that followed swallowed up FastBlast, but the lessons were there.

WRIF was one of the stations that was an early FastBlast client, so it's no surprise that during a tough period, they're right back in this space, at a time when the Internet has blown past other media, and has emerged as a dominant advertising force.

There are other ways to skin this cat besides television, billboards, and even direct mail.  In the same way that radio is trying to build viable digital tools, a smart Internet advertising program can provide cost-effectiveness, and the ability to reach listeners in a great environment.

These times force us all to come up with new solutions to traditional challenges.  It's nice to see that an old dog like WRIF can continue to learn new tricks.