« A Record Performance | Main | Pissed Off » 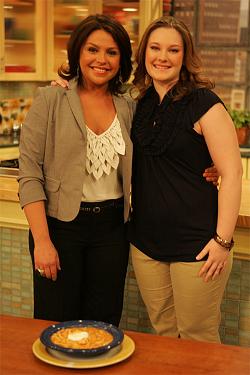 As March Madness comes to an end - hey, Michigan State did their very best - it continues to amaze me how many media outlets and personalities utilized their version of brackets to have some fun and make a little noise.  We were pleased that many of our stations hopped on for the ride.

Rachael Ray was at it, too.  Offering a chance to win a little fame and fortune and $5,000 of free groceries, she created "March Menu Mania," where real folks could compete by entering their own personal recipes.  Overall, 1,200 recipes were submitted to the promotion's partner, USA Today.  The winner, Mandi Forester, got to make her white chicken chili on Rachael's show.

This simple contest is more evidence that the combination of Reality TV and the allure of real people competing for the spotlight makes for compelling TV - and radio.  We have long championed the appeal of consumer-generated content, a place where radio can shine by giving listeners the chance to do our jobs.  "Hey, Mom, I'm on...." was always a big hit for radio because it pulls back the curtain and lets listeners take their shot at putting together a great playlist.

All it cost Rachael Ray and USA Today was some grocery money, and the result was a successful promotion that was media and fan-friendly.  Radio has that same magic.  I was in Chicago last weekend, and enjoyed a nice meal with a couple of successful doctors.  When the conversation turned to radio, and we started talking about some of their favorite DJs, they couldn't believe I know Kevin Matthews.  Sometimes, we get a little jaded or simply buy into the hype that radio doesn't matter anymore.

Stations have incredible assets and can give listeners a chance to live their dream - a chance to share some music, and fulfill many listeners' fantasies - the chance to play DJ on the radio.