JacoBlog - Jacobs Media's Blog: Have You Seen It?

Have You Seen It? 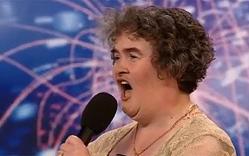 Last week proved once again the power of video streaming - in both incredible and horrifying ways.  On the touching, moving side, Britain's Got Talent gave birth to another star.  This time, it was the unlikeliest of the unlikeliest - dowdy Susan Boyle knocked out the judges on the British version of American Idol.  This video - when I finally got around to it - had already been viewed more than 19 million times (and there are several other versions of it floating around YouTube and the Internet, too).  There's nothing more powerful than watching these judges - including Simon Cowell - get blindsided on video.

Forty-five years ago, when the Beatles played on The Ed Sullivan Show, there were only three TV channels available, and Americans all watched the same shows.  It wasn't difficult for overnight hits to be born.  But in today's fragmented, "Long Tail" world of entertainment, viewing is dispersed across thousands of outlets, making it so difficult for mass appeal hits to materialize.  Those who are moved by them pass them on to friends, co-workers, and family members.  That viral quality creates even more impact.

We're seeing this big-time in our new Technology Poll, just released to our participating clients last week.  Video streaming continues to become more popular among just about everyone.  More and more, consumers are spending time with streaming video, and while YouTube is still very hot, network television sites, Hulu, and even radio websites are moving up in our survey.  This speaks to the need for radio to be thinking more visually - a drum we've been beating for several years now.  Personalities, jocks, and programmers need to get past "the theater of the mind" and embrace the change that video has ushered in, or else we'll end up like Kodak, who was in denial for too long about the impact of digital photography, while trying to hopelessly protect their film franchise. 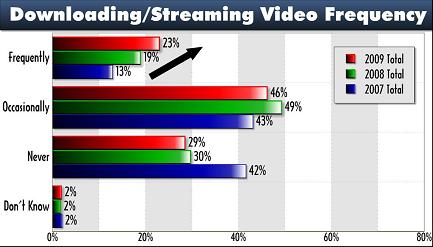 What's the dark side of YouTube and video sharing?  Domino's Pizza felt the power (and the fury) of word-of-mouth last week when a couple of their employees in Conover, NC created a crude homemade video, depicting gross acts during the preparation of pizza.  They posted their masterpiece on YouTube, and of course, it spread like wildfire.  Before the video was pulled, 1,000,000 viewers watched in horror.  While Domino's fired these employees (who have been arrested on felony charges even though the tainted food was not delivered), the brand damage was done.

A company spokesperson, Tim McInTyre, noted: "We got blindsided by two idiots with a video camera and an awful idea."  And in the process, online surveys show that Domino's reputation has been seriously dented by the incident.

Amazing when you think about it:

Two idiots with a video camera - and a nationally known and respected company is on its knees.

A middle-aged woman blows them away on Britain's Got Talent, and we're talking about it thousands of miles away.

How can your radio station harness the power of viral video to overcome negligible marketing budgets during a time when YouTube might be a better tool than buying 350 GRPs a week on your local television stations?

How can your morning show enhance the experience and create buzz with tools such as webcams, viral video, and the power of your consumers?

(Just don't spit on the pizza.)