Here’s a guest blog from Keith Cunningham, who continues to be inspired by some of the incredible metrics being generated by Facebook.

In the inaugural Jacobs Media Tech Poll, the “cell phone only” problem was first discovered, and there was also a little thing called the iPod that looked to have some promise.  What a difference a few years make.

In Tech Poll V, we’ll once again explore all things tech and media, from apps to cell phones, radio to TV to newspapers, iPods to video games and so on.  The goal, of course, is to help programmers get an updated, in-depth look at how technology is affecting the lives of their listeners.

Interestingly, social networking didn’t really exist in that first survey back in ’05.  Today, it’s a monster.  I stumbled upon a great blog from Julie Ann Reda, Sr. Product Manager for Yesmail, who posted the "4 Tools to Start Making Sense of the Clutter."  It contained the following data (courtesy of Rapleaf’s July numbers: 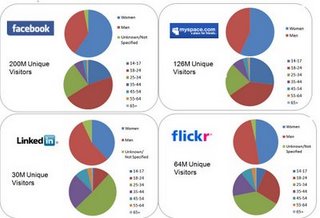 So, some perspective.  Facebook’s unique visitors just surpassed the total population of Brazil.  Even LinkedIn is respectable, inching very close to the number of Canadian residents.  This is serious data.

There are many conclusions to draw from the above numbers – not the least of which is the necessity for stations to have a presence in the social networking world.  While radio still thinks in terms of banners at events, the ability to reach and connect with thousands of “friends” on Facebook has become a powerful tool.

A few years ago Facebook was mostly a student-based network, and its numbers were far behind MySpace.  Only in the digital world can one amass an audience of over 200,000,000 in a short period of time.  When you think about how long it took for traditional media to reach that critical mass – radio, TV, and even the Internet – the Facebook story is an amazing one.

And don’t let the demographic numbers fool you.  Facebook is not just for young people.  Their adult numbers are rising fast.  The danger Facebook faces is becoming too popular and being perceived as “everyone’s website,” not “mine.”  Of course, that’s a problem that radio would love to have.

Pandora came out with a statement recently saying that 20% of their volume is now coming from iPhone users. Pandora.com and iPhone are less than two years old. Pandora is already a top 100 most visited website (according to Alexa) and yet 1/5 of the traffic isn't through a "normal" computer connection. Incredible change in a short amount of time.

How many radio stations have the "buy" music from iTunes or Amazon capability up and running on their website like Pandora?