As more and more businesses and institutions are under distress because of the weak economy, it should come as no surprise that music festivals aren't getting a hall pass.  The LA Times reports that many are under serious financial pressure, while some are going on hiatus or simply shutting down.

The Langerado Music Festival in Florida was canceled due to weak sales, the San Francisco Blues Festival is taking a year off, and the Appel Farm Arts & Music Festival in New Jersey is officially on hiatus.  A similar weakness in festival revenue is occurring overseas as Scotland's Hydro Connect Festival and Britain's Red List Live have also been put on hold.

So how do you explain the success of this year's Coachella Valley Music & Arts Festival, now in its 10th year?  Coachella's founder, Paul Tollett, has the answer:  Classic Rock.  With the addition of Paul McCartney and Roger Waters, Coachella has a lot more to offer than the standard fare like Kings of Leon or the Killers - both great bands - but how many expensive festival tickets can they sell.

As Tollett notes, "Prince or Roger Waters or Paul McCartney - artists who haven't done a million festivals - it helps give us a unique outlet."  Well, yeah, and it also doesn't hurt that they are legacy acts that guarantee ticket sales because of their huge followings.

To read some of the worshipful McCartney blog reviews, click below: 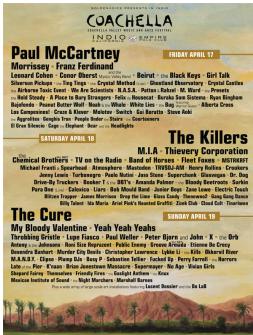 So, it shouldn't surprise anyone that marketers are depending more and more on heritage brands that have stood the test of time.  New ads for Post Shredded Wheat, Lowe's Home Improvement, and Allstate are all pointing to their time in grade, and their stability during uncertain times.

As Lisa Cochrane, Allstate's VP of Marketing points out, "We're trying to bolster trust and confidence by saying that we started in the Great Depression, and we survived 12 recessions.  We're saying we know how to approach things."

The same could be said for heritage radio stations - not the stations that seem to be in the "format of the month club" - but brands that have been around for decades.  As newspapers die and other media companies come and go, a radio station that has been there for both advertisers and consumers over the years has a leg up in this economy.

As cluster managers and corporate bean counters go through the trying process of determining who should get available resources in this environment, special consideration should go to station brands that have longevity and credibility.  There have been too many instances in post-consolidation radio where great stations have been left hanging because of the company's penchant for treating all stations in the cluster the same.

They aren't.  And to starve great heritage radio stations is short-sighted, and ultimately damaging to the company.  There's a difference between McCartney and The Knux.  Just ask Paul Tollett as he's counting his box office receipts this week.