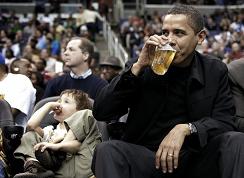 What should a personality do when he/she moves to a new town and needs to learn the lay of the land?  Most would advise him to get out, see the city, show up in as many places as possible, and get to know the people and the market.  For some reason, however, it's often difficult to convince jocks that there's a benefit - educational and promotional - in getting out of the studio, meeting the market, and learning some of the cool places to go and hang out.

They should take a lesson from the resident of the White House.  While most Presidents tend to be stay-at-homers because of the difficulty of getting out and meeting the constituents, the Obamas are hitting the streets like a DJ trying to nail that first ratings book.  As Woody Allen once said, "80% of success is showing up."

In just a few short weeks, the President has done just that.  He attended a Wizards/Bulls basketball game where a nearby fan noted, "I couldn't believe that he was so accessible that I could literally shake his hand and heckle him about needing to suit up because his team was losing."

The President and the family have turned up at expensive D.C. restaurants, as well as local dives and hangouts.  Michelle Obama has served up lunch at local soup kitchens (it wasn't even Thanksgiving).  As she mentioned during a visit to a local health clinic, "We were taught you have to get to know the community you're in, and you have to be a part of that community."

These are all elements that locals appreciate from famous people - whether they are actors, sports stars, DJs, and yes, even Presidents.

The Obamas are in the process of redefining the White House mystique during a time when a lot of the old rules and conventions are being challenged.  We certainly understand that from a media standpoint as radio's role in the media universe is undergoing a tough redefinition of its own.

The Obama approach is simply to immerse themselves in their new hometown, and establish some eye contact with people.  It's a plan that is already generating conversation and buzz.  When voters feel closer to a candidate, it makes it easier to create that all-important fan bridge that can help get you through the tough times.  And by behaving differently than past Commanders-In-Chief, President Obama garners attention, a little drama, and a lot of good will.

Sitting in the comfortable confines of the studio - or the Oval Office - is certainly easier and more convenient than showing up, shaking hands, and just hanging out.  But if local personalities want to truly have some impact at a time when other media outlets are pulling up their tents or just pulling back, they could take a lesson from the new Personality-In-Chief.  It's just smart.

Gee, another post that mentions Obama. What a surprise! Just saying.

C'mon, Richard - it's been at least a week. I will try to look for some positive Bobby Jindal or Eric Cantor stories, I promise.