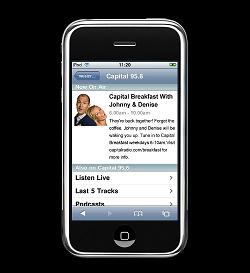 It is fascinating that at a time when there are real signs that streaming is working - in both PPM and in sales revenue - some broadcasters are pulling the plug.  I'm not talking about Jerry Lee's B101 because I believe his cessation is about protesting musicFIRST, rather than trying to save a few bucks.

As broadcasters spend all their energies computing how their slashing and budget-cutting might affect operations, and not enough time strategizing how their content can be best utilized to grow their audience and their revenue, many could miss the boat on streaming.

Here are two indicators that there's something going on:

Streaming is beginning to show up in PPM.  In San Jose, KSFO pulled a .9 (6+), while KOST in L.A. hit a .8.  This is an indication that there is indeed critical mass to be had with streaming, especially with solid content and a well-promoted web presence.  (Most stations continue to under-promote their streams, despite the at-work benefits.)

And revenue is being generated.  TargetSpot's Doug Perlson told the Kagan Summit that advertisers are quickly embracing online radio.  And the RAB's Jeff Haley noted that Internet radio revenue increased 28% in January, and 12% in February - in this economy.

Radio's future is to provide content in places where consumers have moved, and streaming should be thought of not as an unnecessary expense, but as the ability to build new transmitters and towers that reach listeners on their desktops and mobile devices.

As we saw in "The Bedroom Project" two years ago, radio is steadily losing its listening locations.  Those nightstand clock radios are being replaced by cell phone alarms.  The car radio is in the process of being usurped by the ability to connect iPods.

Streaming represents the way forward, yet another reason why our iPhone initiative has been so successful in the past several months, and why PPM is registering streaming listening.  Later in the month, Paul will be presenting at RAIN's Internet Radio Summit, an exciting day of sessions that focus on opportunity, growth, and revenue generation.  And we'll be unveiling some truly dynamic data from our fifth annual Tech Poll that continue to support streaming initiatives.

One year from now, when we're enjoying an improved economy, and everyone's talking about growth once again, those who continued to support their streams and looked forward will have an even better story to tell about how they survived this crisis.